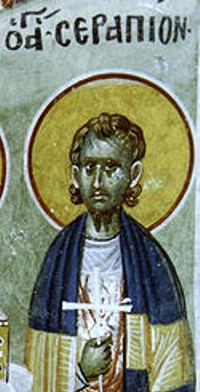 The Holy Martyr Serapion suffered for Christ before the Emperor Severus (193-211). As a Christian he was brought to judgment before the governor Achilles. The holy martyr firmly announced to the pagans about his faith in Christ and he was subjected to inhuman torments, after which he was thrown into prison.
Healed by the Lord Jesus Christ, he was brought to the judgment place and he presented himself before the judge completely healthy. The enraged pagans sentenced the saint to burning. Thrown into a bon-fire, he gave up his soul to God (+ c. 205).