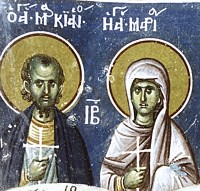 The Holy Martyr Marcian, a native of Lyceian Iconium, while still at a youthful age converted many to Christ by his fiery preaching. For his zealousness the idol-worshippers subjected the saint to bodily punishment, and then sent him to Cappadocia to the governor Perennias, who now by persuasion now by threatening, attempted to turn away the youth from the Truth – Christ. Saint Marcian fearlessly testified about the truthfulness of the Christian faith and he accused Perennias of worshipping soul-less idols. The enraged governor gave orders to subject the saint to severe torments, but in his sufferings the saint remained steadfast in his faithfulness to Christ. They cut off his head when he prayed, giving thanks to God for his fate (+258).