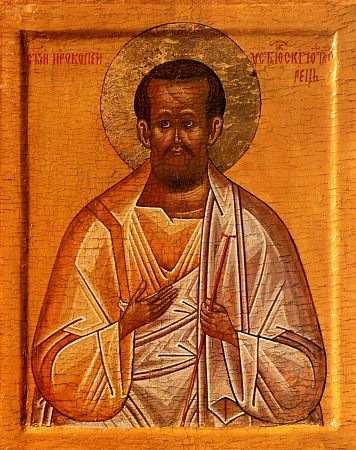 He was a foreign merchant and was engaged in trade in Novgorod. Captivated by Orthodox worship and "the divine teaching" of the Holy Orthodox faith, he accepted Orthodoxy, distributed "his demanding riches", scorned worldly vanity and, "by shining piety", became a monk in the monastery of the Venerable Barlaam of Khutinsk. Avoiding popularity, he then withdrew from the city of Ustiug, selected here the "turbulent and, according to the apostle, foolish way of life," and was the first fool for Christ in Russia. It was very distressful for him to complete his difficult asceticism. With three kachergami, or wooden crutches, under his arms, summer and winter he went without footwear and in poor clothes, eating whatever scraps were given him, spending the night frequently on the porch of the church, "suffering every irritation", "shunning every evil thing", "shining with faithful sense" and resembling "the patience of the ancient Job". "Having a gracious soul, and a pure mind, and a vigorous heart, an unblemished faith, and a truly immeasurable love", he maintained "for everyone meekness and without malice, for the mourning consoling, and to those in trouble speedy help", not looking that many offended him, quite often beat him and sneered at him" with violence for the sake of Christ". Accepting alms from the compassionate, he never took anything from the rich men who have made usurious profit, was even hungry, and quite often and for a few days went without any food. For his great ascetic feats Procopius received the gift of insight. In conversation with pious people each of his words and actions was instruction and caution. Through his prayers he saved Ustiug from a stone cloud, which then burst about 20 versts (about 13 miles) from the city above an empty place. He died in 1303 at the gate of the Archangel monastery, "with light wings he flew from many troubled parts of the world" and "inherited paradise". His relics are in the Ustiug cathedral. 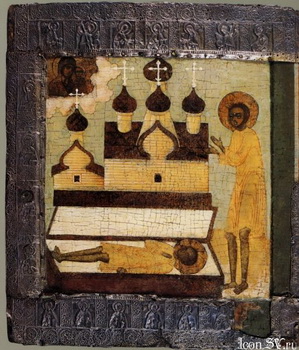