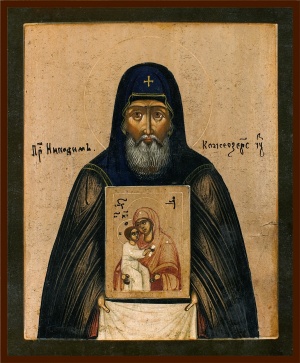 The Monk Nikodim of Kozheezersk, in the world Nikita, was born in the village of Ivan'kovo near Rostov into a peasant family. While still in his youth, working with his father in the fields, he heard the words: "Nikodim! Nikodim!" announcing his future monasticism.
After the death of his parents he learned the blacksmith craft in Yaroslavl' and then arrived in Moscow. One time, going past Kulishka, Nikita stopped at the hut of the holy fool Ilia, who upon seeing him cried out: "the Khuz'yugsk ascetic hath arrived". These words made a strong impression upon Nikita, and he perceived them as a summoning to the monastic life. Having given away everything he owned, he went to the archimandrite of the Chudov monastery, Paphnutii, asking to be accepted into the number of the brethren.
In this monastery he accepted tonsure with the name Nikodim. For eleven years the monk was an example to the brethren in humility, obedience, non-covetousness and brotherly love. In 1602 the hegumen of the monastery, Paphnutii, was made metropolitan of Sarsk, and he took Nikodim with him. But the saint was seeking for a solitary and ascetic life. A year afterwards, with the blessing of the Vladyka, he set out to the north and at first entered the common-life Kozheezersk monastery, in which he spent a year and an half.
His desire for quietude led him to the Rivulet Khuz'yuga, 5 versts distant from the Kozheezersk monastery. There in a forest thicket he set up for himself a small cell and dwelt in it without emerging for 35 years, in imitation of Paul the Thebian. In total quiet, far off from the world, the saint made his strict rule of prayer for the world. He shared with the brethren of the monastery the fruits of his labour, so also the fish, which he loved to catch on fishing-tackle. Wild deer walked without worry and fed around his hermitage. The Monk Nikodim passed the night at prayer and only occasionally permitted himself to doze off now and then whilst sitting up. By his austere efforts he attained to high spiritual abilities, – he acquired the gift of tears and of uninterrupted prayer. God rewarded him with a graced perspicacity and the power of healing the sick.
One time two radiant men appeared to Saint Nikodim: Sainted Alexei, Metropolitan of Moscow, and the Monk Dionysii, Archimandrite of the Holy Trinity Sergiev Lavra, – in angelic garb. They announced to the monk about the time of his going to the Lord, which occurred in 40 days, on 3 July 1640. The relics of the Monk Nikodim rest beneathe a crypt in the Bogoyavlenie-Theophany church of the Kozheezersk monastery. The life of the saint was recorded by his student, the priestmonk Iakov.