Icon of the Mother of God the “Milk-Giver” of the Hilandar Monastery on Mt. Athos 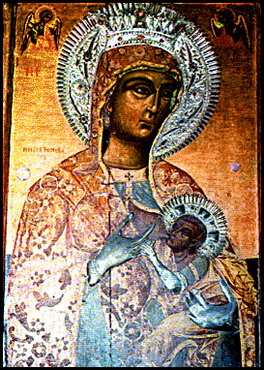 The “Milk-Giver” Icon of the Mother of God was originally located at the Lavra of St Sava the Sanctified near Jerusalem. Before his death, the holy founder of the Lavra foretold that a royal pilgrim having the same name as himself would visit the Lavra. St Sava told the brethren to give the wonderworking icon to that pilgrim as a blessing.

In the thirteenth century, St Sava of Serbia visited the Lavra. As he approached the reliquary of St Sava the Sanctified, the saint’s staff fell at his feet. The brethren asked the visitor his name, and he told them he was Archbishop Sava of Serbia. Obeying the instructions of their founder, the monks gave St Sava his staff, the “Milk-Giver” Icon, and the Icon “Of the Three Hands” (June 28 & July 12).

The holy archbishop took the icon to Hilandar on Mount Athos and put it on the right side of the iconostasis in the church of St Sava at the kellion of Karyes, which is attached to Hilandar. The icon was later named Typikonissa, since the Rule (Typikon) of St Sava was preserved there.