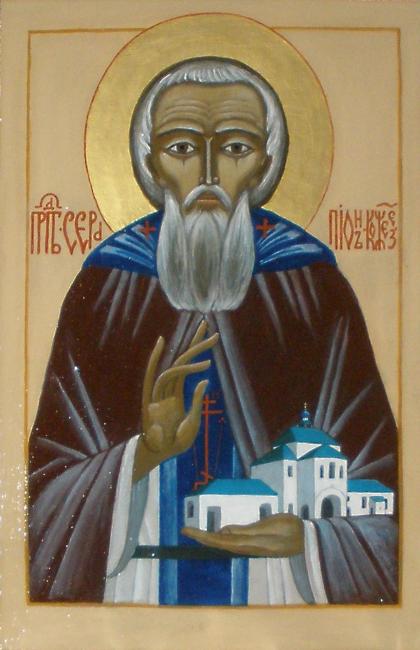 The Monk Serapion of Kozheezersk was brought to Moscow amongst the Kazan Tatar captives in the year 1551. They called him Murza (Tatar-prince) Turtas Gravirovich. He accepted Baptism with the name Sergei and lived in the home of the Moscow boyar-noble Zakharii Plescheev. Saint Sergei so sincerely accepted the Christian faith, that he decided to devote himself entirely to God. On a desolate island of Lake Kozha in 1560 he encountered the monk-hermit Nyphontii and stayed to live with him. At the fervent request of Saint Sergei, the monk Nyphontii tonsured him into monasticism with the name Serapion. In 1584, after the death of the monk Nyphontii, the Monk Serapion set off to Moscow and besought of tsar Feodor Ioannovich (1584-1598) a grammota land-deed for a monastery. And after his return to the monastery, the Monk Serapion with the gathered brethren made a clearing in the forest and built two churches: one in honour of the Holy Theophany and the other in honour of Saint Nicholas. Patriarch Job (1589-1605, + 1607)provided the Monk Serapion with the antimins for the church-altars. In 1608, when the Monk Serapion had become old, he made his disciple Avraamii the hegumen in place of himself. The Monk Serapion died in 1611 and was buried at a church of the Kozheezersk monastery. In 1613 the Kozheezersk monk Bogolep wrote down an account about the founding of the monastery and about its initial construction under the Monk Serapion. He compiled also a life of the Monk Serapion.