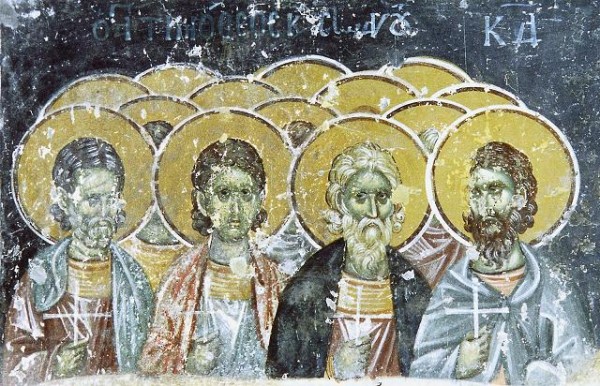 The Holy Martyrs Babylas of Sicily and his two disciples Timothy and Agapius lived during the third century on the outskirts of Rome. St Babylas was born in the city of Reupolium into a rich family, and he was raised by his parents in the Christian Faith.

While still in his youth he abandoned the world, secretly going from the house of his parents to a mountain, where he spent all his time in fasting, prayer and silence. His two disciples, Timothy and Agapius, labored with him. Fleeing a persecution by the pagans, he went with his disciples to the island of Sicily, where they converted many unbelievers to Christ.

The governor of the island, angered by the missionary activity of St Babylas, ordered that he and his disciples be arrested, and he also had them tortured. The saints patiently endured their sufferings, and all three died by the sword. Their bodies were thrown into a fire, but the flames did not harm the warriors of Christ. They were buried on the island of Sicily by local Christians.

Your holy martyr Babylas, O Lord,
Through his sufferings has received an incorruptible crown from You, our God.
For having Your strength, he laid low his adversaries,
And shattered the powerless boldness of demons.
Through his intercessions, save our souls!