Our Holy Father John the Hermit 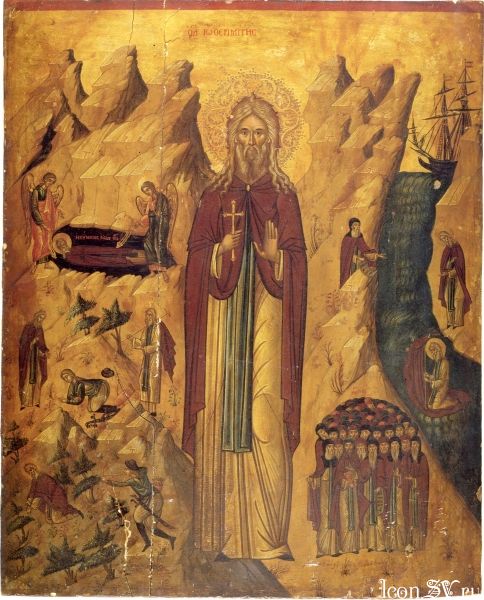 Saint John the Anchorite: During a persecution against Christians, the devout widow Juliania of Armenia hid from pursuers together with her two young children John and Themistea. She taught her children to pray and to read the Holy Scriptures.

From time to time John secretly visited a nearby monastery, thereby placing himself in danger. Once, a pious old man advised him to find a more secluded place for prayer. Returning home, the saint told his mother that he was going to visit the Elder. Thinking that her son would soon return, she let him go.

John went to the desert-dweller Pharmutios and received his blessing to live alone in the wilderness. The young ascetic found an abandoned well, which was filled with snakes, scorpions and other vile creatures. He lowered himself into the well and lived there for ten years in fasting, vigil, and prayer.

The angel who brought food to the hermit Pharmutios also brought bread for St John. The angel did not bring the bread directly to John, however, lest the young ascetic become filled with pride. Food was sent to him through his spiritual Father, Pharmutios.

St John had many temptations from the devil to test him. Demons assumed the appearance of his mother, his sister, his relatives and acquaintances in order to sadden the ascetic and compel him to give up his ascetic struggles. With tears they approached the well one after the other, begging St John to leave with them. All this time the saint did not cease to pray. Finally he said, "Be gone from me," and the demons vanished.

St John lived in the well until the time of his blessed repose. Through God's providence St Chrysikhios, who had struggled in the desert for thirty years, came to bury him. On the eve of his repose, St John told Chrysikhios of his life and struggles for salvation. After his death, numerous miracles occurred at the place of his ascetic deeds.