St Mark the Confessor, Bishop of Arethusa in Syria 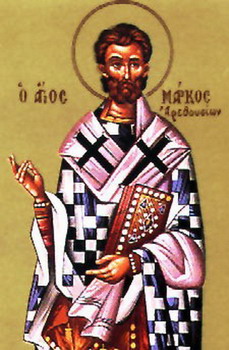 Hieromartyr Mark, Bishop of Arethusa, suffered for his faith in Christ under the emperor Julian the Apostate (361-363). By order of the emperor Constantine (May 21), St Mark had once destroyed a pagan temple and built a Christian church.

When Julian came to the throne, he persecuted Christians and tried to restore paganism. Some citizens of Arethusa renounced Christianity and became pagans. Then St Mark's enemies decided to take revenge on him. The old bishop hid himself from the persecutors at first, but then gave himself up when he learned that the pagans had tortured many people in their search for him.

The holy Elder was led through the city and given over to torture. They tore out his hair, slashed his body, dragged him along the street, dumped him in a swamp, tied him up, and cut him with knives.

The pagans demanded that the holy bishop pay them a large sum of money to rebuild the pagan temple, and he refused to do so. The persecutors invented several new torments: they squeezed the Elder in a foot-press, and they cut off his ears with linen cords. Finally, they smeared the holy martyr's body with honey and grease, then hung him up in a basket in the hot mid-day sun to be eaten by bees, wasps, and hornets. St Mark did not seem to notice the pain, and this irritated the tormentor all the more.

The pagans kept lowering the price he had to pay for their temple, but St Mark refused to give them a single coin. Admiring him for his courage and endurance, the pagans stopped asking him for money and set him free. Many of them returned to Christ after hearing his talks.

St Gregory the Theologian (January 25) describes the sufferings of St Mark in his First Oration against Julian. Theodoritus of Cyrrhus also mentions him in his CHURCH HISTORY (Book 3, Ch. 6)

In preparation for the contest, you anointed an assembly of martyrs
and bolstered them by your steadfastness, glorious Mark.
You finished your course together with them
and all of you were found worthy of the joy of heaven.
Righteous father, entreat Christ our God to grant us His great mercy.

Kontakion not provided in Typikon. 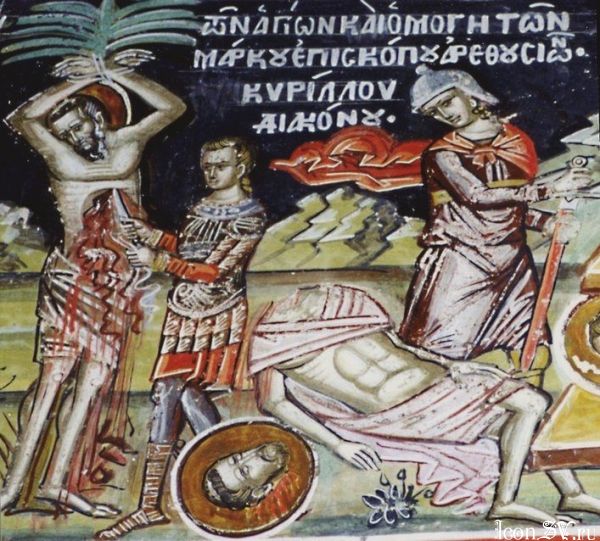