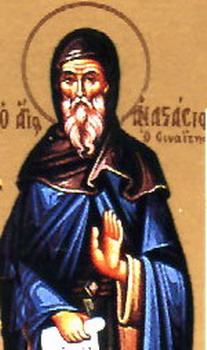 He was chosen as Patriarch of Antioch in the reign of the Emperor Justinian while still a monk on Mount Sinai. His virtues, purity of life, great spiritual learning and staunch faith won him the patriarchal throne. But Justinian fell into the heresy of Docetism. Eutychius, Patriarch of Constantinople, and Blessed Anastasius reacted sharply against this. The Emperor exiled Eutychius and wanted to exile Anastitsius also, but could find nothing in his life capable of criticism. When Justinian was dying, he repented and returned Eutychius to the patriarchal throne, but Justin, his successor, succeeded in exiling Anastasius on the basis of certain slanders. Anastasius spent twenty-three years in exile and was then returned to the throne of Antioch during the reign of the Emperor Maurice. He governed the Church of God for six further years and finished his earthly course in 599.