Our Holy Father Theodore the Sykeote 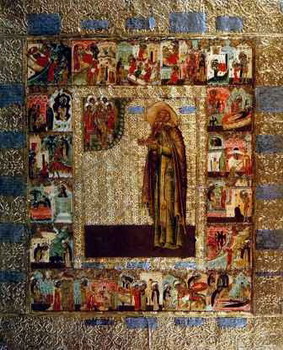 Saint Theodore the Sykeote was born in the mid-sixth century in the village of Sykeon, not far from the city of Anastasiopolis (in Galatia, Asia Minor), into a pious family. When his mother Maria conceived the saint, she had a vision of a bright star overshadowing her womb. A clairvoyant Elder, whom she consulted, explained that this was the grace of God being poured forth on the infant in her womb.

When the boy reached the age of six, his mother presented him with a golden belt, since she intended that her son should become a soldier. That night the Holy Great Martyr George (April 23) appeared to her in a dream, and he told her not to consider military service for her son, because the boy was destined to serve God. The saint's father, Cosmas, had served as a messenger of the emperor Justinian the Great (527-565), and he died at an early age. The boy remained in the care of his mother, and his grandmother Elpis, his aunt Dispenia and his little sister Vlatta also lived with them.

In school, St Theodore displayed great apptitude in his studies, chief of which was an uncommon ability for reasoning and wisdom. He was quiet, mild, he always knew how to calm his comrades, and he did not permit fights or quarrels among them.

The pious Elder Stephen also lived at his mother's house. Imitating him, St Theodore at the age of eight began to eat only a small morsel of bread in the evening during Great Lent. So that his mother should not force him to take supper with everyone, the boy returned home from school only toward evening, after he had partaken of the Holy Mysteries with Elder Stephen. At the request of his mother, the teacher began to send him home to supper at the end of his lessons. St Theodore, however, ran to the church of the Great Martyr George, where the saint appeared to him in the form of a youth, and ushered him into the church.

When St Theodore turned ten, he fell deathly ill. They brought him to the church of St John the Baptist and placed him in front of the altar. The boy was healed by two drops of water that fell from the face of the Savior in the dome of the temple. At this time the Great Martyr George began appearing to the boy at night, and also leading him to his own temple to pray until morning. His mother, fearing the dangers of the forest at night, urged her son not to go at night.

Once, when the boy had already gone, she angrily followed him to the church, and she dragged him out by the hair and tied him to his bed. But that very night the Great Martyr George appeared to her in a dream, and commanded her not to hinder the child from going to church. Both Elpis and Dispenia had the same vision. The women then understood St Theodore's special calling, and they no longer hindered him. Even his little sister Vlatta began to imitate him.

At twelve years of age, the saint had a dream in which he saw Christ on the Throne of Glory, Who said to him, "Struggle, Theodore, so that you may obtain a perfect reward in the Kingdom of Heaven."

From that time, St Theodore began to intensify his labors. He spent both the First Week of Great Lent and the Week of the Veneration of the Cross in complete silence.

The devil considered how to destroy him. He appeared to the saint in the form of his classmate Gerontius, and urged him to jump off a precipice, but the Great Martyr George saved the boy.

Another time, the boy went into the desert to obtain the blessing of the Elder Glycerius. Then there was a terrible drought throughout the land, and the Elder said, "Child, let us pray to the Lord on bended knee, asking Him to send rain. Then we shall learn whether our prayers are pleasing to the Lord." The old man and the boy began to pray, and immediately it began to rain. Then the Elder said to St Theodore, that the grace of God was upon him, and he blessed him to become a monk when the time came.

When he was fourteen, St Theodore left home and lived near the church of the Great Martyr George. His mother brought him food, but St Theodore left everything on the stones by the church, and he ate only a single prosphora each day. Even at such a young age, St Theodore was granted the gift of healing. Through his prayers a demon-possessed youth was restored to health.

St Theodore then fled human glory and he withdrew into complete solitude. Under a large boulder not far from the church of St George, he dug a cave and persuaded a certain deacon to cover over the entrance with earth, leaving only a small opening for air. The deacon brought him bread and water and he told no one,where the monk had hidden himself.

For two years St Theodore lived in this seclusion and complete quiet. His relatives mourned for the saint, thinking that he had been devoured by wild beasts.

The deacon finally revealed the secret, since he was afraid that St Theodore would perish in the narrow cave, and moreover he pitied the weeping mother. They took St Theodore out of the cave barely alive.

The mother wanted to take her son home and nurse him back to health, but the saint remained near the church of St George, and after several days he was completely well.

News of the youth's exploits reached the local bishop Theodosius, who ordained him to the diaconate, and later to the holy priesthood, although the saint was only seventeen years old at the time.

After a certain while St Theodore went to venerate the holy places in Jerusalem, and there at the Chozeba Lavra near Jordan, he received monastic tonsure.

When he returned to his native land, he again continued to live near the church of St George. His grandmother Elpis, his sister Vlatta and his mother entered a women's monastery on the saint's advice, and his aunt died in a good confession.

The ascetic life of the young hieromonk attracted to him people seeking salvation. The saint tonsured the youth Epiphanius, and later on a pious woman, healed by the saint from her sickness, brought him her son Philoumenus. Then the virtuous youth John also came to him. Thus brethren gradually gathered around the monk.

St Theodore continued in his harsh labors. At his request a blacksmith made him an iron cage without a roof, and so narrow that it was scarcely possible to stand. In this cage the monk stood in heavy chains from Holy Pascha until the Nativity of Christ. From the Baptism of the Lord until Holy Pascha he secluded himself in his cave, from which he emerged only for church services on Saturdays and Sundays. Throughout the whole of the forty-day Fast the saint ate only greens, and bread on Saturdays and Sundays.

Living in such manner, he received from the Lord the power over wild animals. Bears and wolves came up to him and took food from his hand. Through the saint's prayers, those afflicted with leprosy were healed, and demons were cast out from whole districts. In the nearby village of Magatia, when locusts threatened the crops, people turned to St Theodore for help. He sent them to church. After Divine Liturgy, which he served, the villagers returned home and learned that during the service all the locusts had died.

When the military commander Mauricius was returning to Constantinople by way of Galatia after a Persian war, the monk predicted that he would become emperor. The prediction came true, and the emperor Mauricius (582-602) fulfilled the saint's request: he sent bread to the monastery each year for the multitude of people being fed there.

The small temple of St George could not accommodate all those who wanted to pray in it. Then through the efforts of the saint a beautiful new church was built. During this while the Bishop of Anastasiopolis happened to die. The people of the city requested Metropolitan Paul of Ancyra to install St Theodore as their bishop.

So that the saint would not resist, the messengers of the Metropolitan and the people of Anastasiopolis dragged him out of his cell by force and carried him into the city.

As bishop, St Theodore toiled much for the welfare of the Church, but his soul yearned for solitary communion with God. After several years he went to venerate the holy places in Jerusalem. And there, concealing his identity, he settled at the Lavra of St Sava, where he lived in solitude from the Nativity of Christ until Pascha. Then the Great Martyr George led him to return to Anastasiopolis.

Secret enemies tried to poison the saint, but the Mother of God gave him three small pieces of grain. The saint ate them and remained unharmed. St Theodore felt weighed down with the burden of being a bishop and he asked Patriarch Cyriacus of Constantinople (595-606) for a release to return to his own monastery and celebrate the services there.

Theodore's sanctity was so evident that when he celebrated the Eucharist, the grace of the Holy Spirit appeared as a radiant purple light, overshadowed the Holy Gifts. One time, when the saint elevated the discus with the holy Lamb and proclaimed "Holy things are for the holy," the holy Lamb floated up in the air, and then settled again upon the discus.

The Orthodox Church venerated St Theodore as a saint, even while he was still alive.

In one of the cities of Galatia, a terrible event occurred: during a church procession the wooden crosses being carried began to strike each other by themselves, with the result that Patriarch Thomas (607-610, March 21) summoned St Theodore, asking him the meaning of this terrible portent. Having the gift of foresight, St Theodore explained that this indicated coming misfortunes for the Church of God (he was prophetically indicating the future heresy of the Iconoclasts). In his grief the holy Patriarch Thomas begged the saint to pray that he would soon die, so that he would not witness the coming woe.

In the year 610 the holy Patriarch Thomas reposed, having asked the blessing of St Theodore. St Theodore also departed to the Lord.

You were known to be sanctified from your earliest infancy.
You were revealed to be filled with grace.
You enlightened the world with miracles
and drove away a multitude of demons, holy hierarch Theodore.
Therefore, pray to the Lord for us.

Mounting upon the virtues as upon a fiery chariot,
you ascended to the heavenly mansions, God-bearing Theodore.
You lived with men like an angel,
and as a man you joined the angelic choir.
Therefore, Venerable Father, you have been shown to be a divine vessel of miracles. 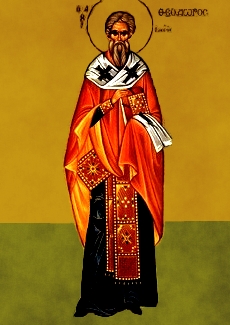