The Venerable Dionysius Of Olympus 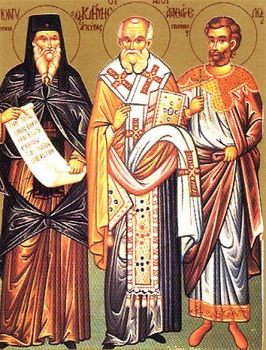 Saint Dionysius of Olympus was born into a family of poor parents in the village of Platina. When he was an infant, the Cross shone over his crib. Fond of prayer and reading spiritual books from his youth, St Dionysius decided to become a monk after the death of his parents. With this aim he went to Meteora, and then to Mount Athos. There he lived with a pious Elder, the priest Seraphim, and under his guidance he began to lead an ascetic life, keeping a strict fast. During Passion Week he went into the forest, and ate only chestnuts. Soon he was ordained deacon, and then priest.

The exalted life of St Dionysius became known, and many monks came to hear his edifying words. He also guided many lawless people onto the path of salvation, among whom was a robber who intended to rob the saint's cell, but was moved to repentance by the Elder's kind and wise words.

The brethren of the Philotheou monastery lost their igumen and asked St Dionysius to be their head. However, he did not receive enough votes, and dissensions arose. Valuing peace and love most of all, St Dionysius withdrew and went to Verria. Later, he fled to Mount Olympus in order to avoid being consecrated as a bishop.

Here those zealous for monasticism began to flock to him. Dionysius built cells for them and also a church and they spent their time in fasting and prayer. Having attained the spiritual heights, he worked many miracles. Often, through the prayers of the saint, the Lord punished iniquitous people who oppressed the monks of Olympus or broke the commandments of Christ. The holdings of a Turk who had expelled the monks and wrecked their monastery were destroyed by severe drought and by hail. The cattle of a herdsman who had oppressed the monastery were stricken with disease and sickness; because of her impudence, a maiden from one of the villages was subjected to an assault of the devil. They all received healing and deliverance from misfortune through the prayers of St Dionysius, after being led to penitence by his lack of malice.

The saint compiled a Rule for monastic life, and was an example of monastic activity. He built a church on Olympus, and also a monastery dedicated to the Prophet Elias. He left the brethren his final testament about the monastic life based on the Rule of the Holy Mountain.

St Dionysius died in the sixteenth century at an advanced age, and was buried on Olympus, in the church portico of the monastery he founded. 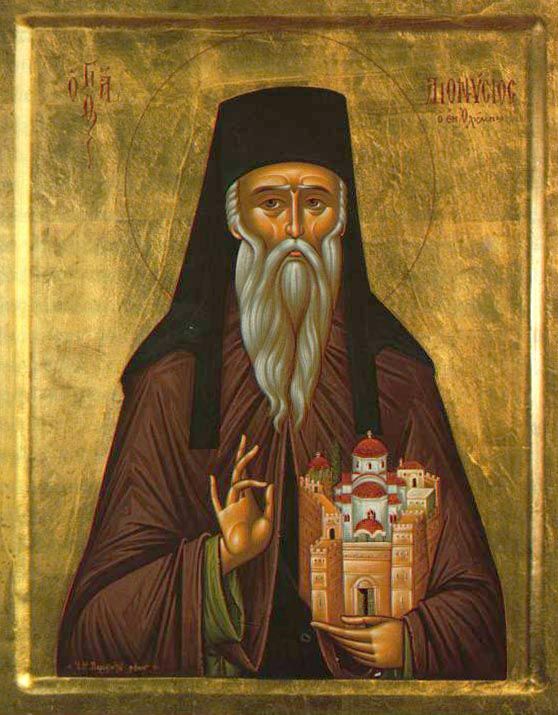