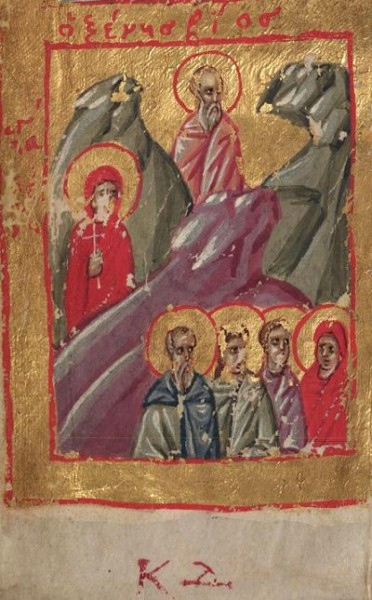 Saint Macedonius, a Syrian hermit, lived during the end of the fourth century and the beginning of the fifth. At the beginning of his ascetic path he led the life of a wanderer, roving through the cities of Phoenicia, Cilicia and Syria, and then he spent forty-five years in a deep pit and lived under the open sky in the Syrian wilderness, shunning human glory.

A multitude of people came out to him, seeking spiritual help and guidance. Only in his old age did he accede to the requests of people to live in a narrow cell built for him. Throughout his life St Macedonius ate only barley, ground up and mixed with water, for which he was called "Kritophagos" ("Barley-Eater") [Grk. he krithê, "barley"; and phagôµai, "to eat"). Only when he felt his strength decline did he begin to eat baked bread.

Because of his ascetic life, God granted him the power to cast out demons and to heal the sick. He died around the year 420, having reached his seventieth year.