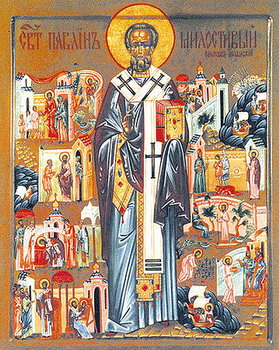 Saint Paulinus the Merciful, Bishop of Nola, was descended from an aristocratic and wealthy family of Bordeaux (France). By virtue of his extensive education and upbringing, the twenty-year-old youth was chosen to become a Roman senator, later he became consul and finally, governor of the region of Campagna in Italy.

At twenty-five years of age, he and his wife were converted to Christ and were baptized. After this he completely changed his manner of life. He disposed of all his property, and distributed the money to the needy, for which he endured the scorn of his friends and servants.

Not having children of their own, the pious couple adopted poor orphans and raised them in the fear of God. In his searchings for a secluded life, St Paulinus went to the Spanish city of Barcelona.

News of his ascetic life spread about, and in 393 they asked him to be ordained as a priest. Soon he left Spain and went on to the city of Nola in Italy, where he was elected bishop.

When the Vandal barbarians invaded Italy and carried off many people to Africa in captivity, St Paulinus used church funds to ransom the captives. However, he did not have enough money to ransom the son of a certain poor widow from slavery in the household of the Prince of the Vandals. So, he volunteered to take his place. Dressed as a slave, St Paulinus began to serve the Vandal prince as a gardener.

Soon his identity was revealed to the ruler, King Riga, in a dream. Not only did he receive his own freedom, but he also won the release of all the other prisoners from Campania, and returned home with them.

St Paulinus is known both as a builder of churches and as a Christian poet. Among his many virtues, his love for mankind and his compassion for the poor and needy deserve special mention. He died at seventy-eight years of age on June 22, 431. Thirty-two of his poems and fifty-one of his letters survive. They contain various moral discourses filled with deep piety.

His relics are in Rome, in the church of the holy Apostle Bartholomew.