Our Holy Father, the Martyr Eustratius of the Kiev Caves 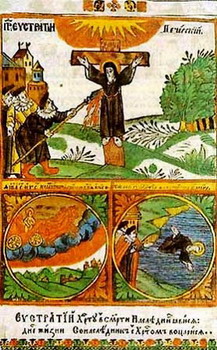 Martyr Eustratius of the Caves was born in the eleventh century at Kiev into a wealthy family. As an adult, he received monastic tonsure at the Kiev Caves monastery, after giving away all his possesions to the poor. St Eustratius humbly underwent obediences at the monastery, strictly fulfilling the rule of prayer and passing his days in fasting and vigilance.

In 1096 the Polovetsians captured Kiev and ravaged the monastery of the Caves, doing away with many of the monks. St Eustratius was taken into captivity, and was sold into slavery with thirty monastic laborers and twenty inhabitants of Kiev to a certain Jew living in Korsun.

The impious Jew tried to make the captives to deny Christ, threatening to kill those who refused by starving them. St Eustratius encouraged and exhorted his brother Christians, "Brothers! Let none of us who are baptized and believe in Christ betray the vows made at Baptism. Christ has regenerated us through water and the Spirit. He has freed us from the curse of the Law by His Blood, and He has made us heirs of His Kingdom. If we live, we shall live for the Lord. If we die, we shall die in the Lord and inherit eternal life."

Inspired by the saint's words, the captives resolved to die of starvation, rather than renounce Christ, Who is the food and drink of Eternal Life. Exhausted by hunger and thirst, some captives perished after three days, some after four days, and some after seven days. St Eustratius remained alive for fourteen days, since he was accustomed to fasting from his youth. Suffering from hunger, he still did not touch food nor water. The impious Jew, seeing that he had lost the money he had paid for the captives, decided to take revenge on the holy monk.

The radiant Feast of the Resurrection of Christ drew near, and the Jewish slave owner was celebrating the Jewish Passover with his companions. He decided to crucify St Eustratius. The cruel tormentors mocked the saint, offering to let him share their Passover meal. The Martyr replied, "The Lord has now bestown a great grace upon me. He has permitted me to suffer on a cross for His Name just as He suffered." The saint also predicted a horrible death for the Jew.

Hearing this, the enraged Jew grabbed a spear and stabbed St Eustratius on the cross. The martyr's body was taken down from the cross and thrown into the sea. Christian believers long searched for the holy relics of the martyr, but were not able to find them. But through the Providence of God the incorrupt relics were found in a cave and worked many miracles. Later, they were transferred to the Near Caves of the Kiev Caves monastery.

The prediction of the holy Martyr Eustratius that his blood would be avenged was fulfilled soon after his death. The Byzantine Emperor issued a decree expelling all Jews from Korsun, depriving them of their property, and putting their elders to death for torturing Christians. The Jew who crucified St Eustratius was hanged on a tree, receiving just punishment for his wickedness.