Our Holy Father Basil the New 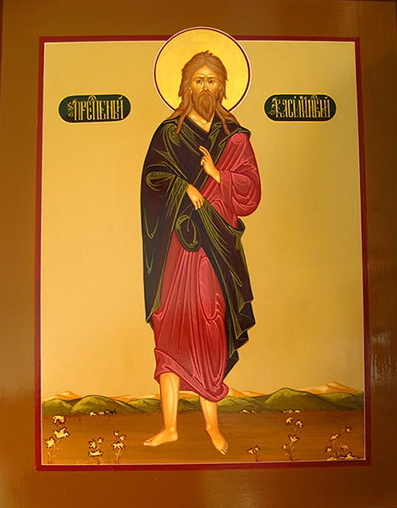 Saint Basil the New left the world in his youth, and struggled in a desolate place. Once, courtiers of the Byzantine Emperor were passing by and saw him dressed in rags, and were alarmed by his strange appearance. Suspicious of the holy ascetic, they captured him and brought him to the city, where the patrician Samon questioned him. When asked who he was, the saint merely said that he was a stranger in the land. They subjected the monk to terrible tortures, but he endured it in silence, not wishing to reveal the details of his ascetic life to them. Samon lost his patience and asked St Basil, "Impious one, how long will you hide, who are you, and from where do you come?" The saint replied, "It is more appropriate to call impious those who, like yourself, lead a life of impurity." After his public humiliation, Samon ordered his men to hang the saint upside down with his hands and feet tied. These torments were so cruel that those witnessing them murmured against Samon. When they released the holy ascetic after three days of torture, they found him alive and unharmed. Samon attributed this miracle to sorcery and had St Basil thrown to a lion. However, the lion did not touch the saint, and lay peacefully at his feet. Samon ordered St Basil to be drowned in the sea, but two dolphins brought him to shore. The saint went into the city, where he met a sick man named John, who was suffering from fever. St Basil healed the sick man in the name of the Savior, and accepted John's invitation to stay in his home. Numerous believers came to the saint for advice and guidance, and also to receive healing from sickness through his prayers. St Basil, endowed with the gift of discernment, guided sinners on the path of repentance, and he could predict future events. Among those who visited St Basil was a certain Gregory, who became his disciple and later wrote a detailed Life of his teacher. Gregory once found an expensive sash at an inn, which had been dropped by the inn-keeper's daughter. He hid it on his person, intending to sell it and give the money to the poor. On the way home, he lost the sash and some other things. St Basil admonished him in a dream, showed him a broken pot and said, "If anyone steals such a worthless thing, they will be chastized four times over. You hid a valuable sash, and you will be condemned as a thief. You should return what you found." After the death of St Theodora, who had attended St Basil, Gregory very much wanted to learn about her life beyond the grave, and he often asked the holy ascetic to reveal this to him. Through the saint's prayers, Gregory saw St Theodora in a dream. She told him how her soul underwent tribulations after death, and how the power of the prayers of St Basil had helped her (The Feast Day of St Theodora of Constantinople is December 30). St Basil died in about the year 944 at the age of 110. The Church calls him Basil the New to distinguish him from other ascetics of the same name.