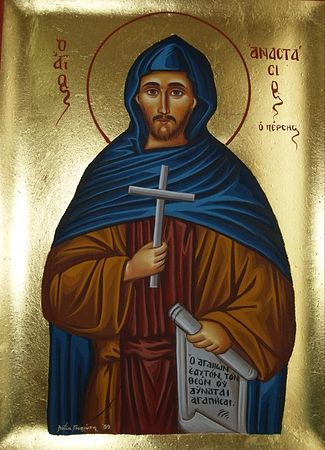 The Monk Martyr Anastasius the Persian was the son of a Persian sorcerer named Bavi. As a pagan, he had the name Magundates and served in the armies of the Persian emperor Chozroes II, who in 614 ravaged the city of Jerusalem and carried away the Life-Creating Cross of the Lord to Persia.

Great miracles occurred from the Cross of the Lord, and the Persians were astonished. The heart of young Magundates was inflamed with the desire to learn more about this sacred object. Asking everyone about the Holy Cross, the youth learned that upon it the Lord Himself was crucified for the salvation of mankind. He became acquainted with the truths of the Christian Faith in the city of Chalcedon, where the army of Chozroes was for a certain while. He was baptized with the name Anastasius, and then became a monk and spent seven years in one of the Jerusalem monasteries, living an ascetical life.

Reading the Lives of the holy martyrs, St Anastasius was inspired with the desire to imitate them. A mysterious dream, which he had on Great and Holy Saturday, the day before the Resurrection of Christ, urged him to do this.

Having fallen asleep after his daily tasks, he beheld a radiant man giving him a golden chalice filled with wine, who said to him, "Take this and drink." Draining the chalice, he felt an ineffable delight. St Anastasius then realized that this vision was his call to martyrdom.

He went secretly from the monastery to Palestinian Caesarea. There he was arrested for being a Christian, and was brought to trial. The governor tried in every way to force St Anastasius to renounce Christ, threatening him with tortures and death, and promising him earthly honors and blessings. The saint, however, remained unyielding. Then they subjected him to torture: they beat him with rods, they lacerated his knees, they hung him up by the hands and tied a heavy stone to his feet, they exhausted him with confinement, and then wore him down with heavy work in the stone quarry with other prisoners.

Finally, the governor summoned St Anastasius and promised him his freedom if he would only say, "I am not a Christian." The holy martyr replied, "I will never deny my Lord before you or anyone else, neither openly nor even while asleep. No one can compel me to do this while I am in my right mind." Then by order of the emperor Chozroes, St Anastasius was strangled, then beheaded. After the death of Chozroes, the relics of the Monk Martyr Anastasius were transferred to Palestine, to the Anastasius monastery.

Your holy martyr Anastasius, O Lord,
through his suffering has received an incorruptible crown from You, our God.
For having Your strength, he laid low his adversaries,
and shattered the powerless boldness of demons.
Through his intercessions, save our souls! 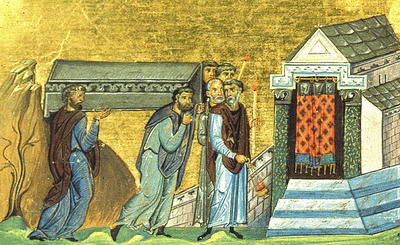 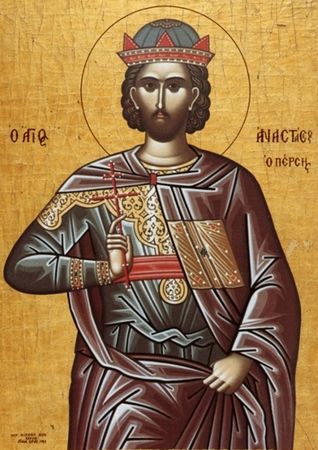