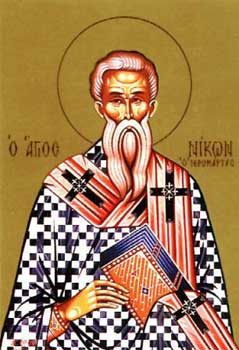 The Monk Martyr Nikon was born at Neapolis (Naples). His father was a pagan, and his mother a Christian. He was not baptized, but his mother secretly instructed him in the tenets of Christianity. Nikon was still a pagan when he reached adulthood. He served as a soldier, and showed unusual courage and strength.

Once, Nikon and his military company were surrounded by enemies. In deadly peril, he remembered the Christian precepts of his mother and, signing himself with the Sign of the Cross, he prayed to God, vowing to be baptized if he were saved. Filled with unusual strength, he killed many of the enemy, and put the rest to flight.

He managed to return home, giving thanks to God for preserving his life. With the blessing of his mother, he set off in search of a priest. This was no easy thing to do in a time of persecution. St Nikon took a ship to the island of Chios. He went up on a high mountain and spent eight days in fasting and prayer, entreating the Lord to help him.

An angel of God appeared to St Nikon in a dream, showing him the way. St Nikon went to Mount Ganos, where many monks were hidden, headed by Theodosius the Bishop of Cyzicus. St Nikon received from the bishop both the mystery of Baptism and the angelic schema (i.e., monastic tonsure). Living in the cave church, St Nikon became an example for all the brethren.

When St Nikon had lived on the mountain for three years, an angel revealed to the bishop that St Nikon should be consecrated bishop, and should move to the province of Sicily with all the monks. Bishop Theodosius obeyed the angel, and then died after he had entrusted the 190 monks to St Nikon. After he buried Bishop Theodosius, St Nikon sailed to Sicily with the brethren, and so was saved from approaching barbarians.

By God's grace, St Nikon came to his native city Neapolis. He found his mother still alive, and he remained with her for the final day of her life. His mother collapsed on his chest with tears of joy and kissed him. Making a prostration to the ground, she said, "I give thanks to You, O Lord, for You have permitted me to see my son as a monk, and as a bishop. Now, my Lord, hear Your servant, and receive my soul." When she had finished this prayer, the righteous woman died. Those present glorified God and buried her with psalmody.

Rumors of St Nikon's arrival spread through the city, and ten soldiers, his former companions, came to see him. After conversing with the saint they believed and were baptized, and went with him to Sicily. Having arrived on the island, St Nikon settled with the monks in a desolate area, called Gigia, near the river Asinum.

Many years passed, and there was another persecution against Christians. Quintilian, the governor of Sicily, was informed that Bishop Nikon was living nearby with many monks. All 199 monks were seized and beheaded, but they left St Nikon alive in order to torture him.

They burned him with fire, yet he remained unharmed. They tied him to the tails of wild horses to be dragged over the ground, but the horses would not budge from the spot. They cut out the saint's tongue, threw him off a high cliff, and finally beheaded him. The body of the hieromartyr Nikon was left in a field to be eaten by wild beasts and birds.

A certain shepherd, possessed by an evil spirit, went to that place, and finding the body of the saint, he immediately fell to the ground on his face. The unclean spirit, vanquished by the power of the saint, had thrown him to the ground and gone out from him with a loud shriek: "Woe is me, woe is me, where can I flee from Nikon?"

The healed shepherd related this to the people. The bishop of the city of Messina also learned of this, then he and his clergy buried the bodies of St Nikon and his disciples.

By your ascetic way of life
you conquered the crafty one, Holy Father Nikon.
By virtue of your holy life you became a rule and model to your disciples,
and with them you struggled for the Faith in the West.
You have all attained glory in heaven.

Of like discipline with the Ascetics, and rivaling the holy Athletes in zeal,
you were offered to the Lord through martyrdom, steadfast and righteous Martyrs.
As your sure guide you had the glorious Nikon;
fighting together with him you sang: Alleluia. 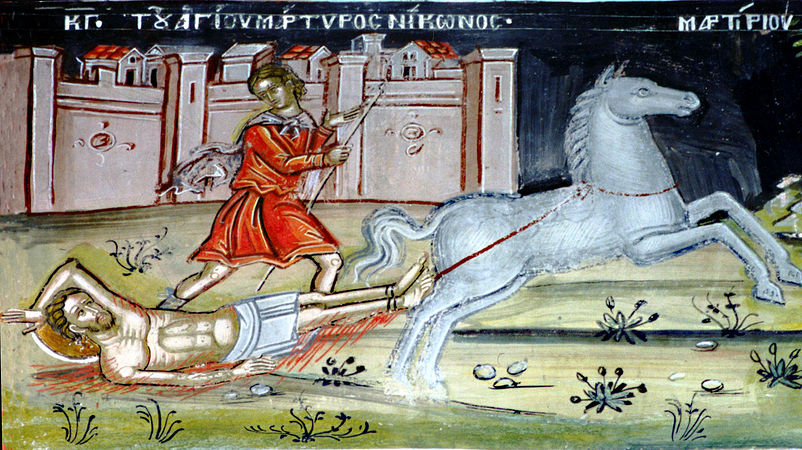