Repose of St Theodosius of Chernigov 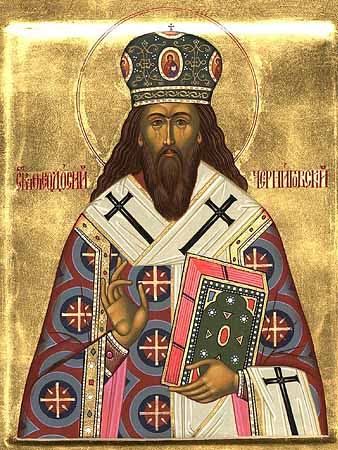 Saint Theodosius, Archbishop of Chernigov, was born in the seventeenth century at the beginning of the decade of the thirties in Podolsk governance. He was descended from a noble family, the Polonitsky-Uglitskys. His parents were the priest Nikita and Maria. The saint was taught Christian piety in his parents’ home, and this piety remained with him throughout his life.

From childhood he was distinguished by a fervent love for God and zeal for the Church. The innate abilities of the youth came to light in the Kiev Brotherhood school at Kiev’s Theophany monastery. The school was flourishing at the end of the 1640s, when its rectors were Archimandrite Innocent (Gizel), and Igumen Lazar (Baranovich), who later became Archbishop of Chernigov. Among its instructors were: Hieromonk Epiphanius (Slavinetsky), Hieromonk Arsenius (Satanovsky), Bishop Theodosius (Baevsky) of Belorus, Igumen Theodosius (Saphonovich) and Meletius Dzik. These were the enlightened men of those days. The comrades of St Theodosius at the school would become future outstanding pastors: Simeon Polotsky, Joannicius Golyatovsky, Anthony Radivillovsky, Barlaam Yasninsky. The Kiev Brotherhood Theophany school was the chief center in the struggle of Orthodoxy against the assaults of Catholic clergy, particularly the Jesuits.

St Theodosius grew to spiritual maturity near the relics of Sts Anthony and Theodosius and other God-pleasers of the Kiev Caves, and he tried to imitate their holy life as much as he could. He devoted all his free time to prayer, meditation on God, and the reading of Holy Scripture.

It might be surmised that the saint did not finish the full course of studies, since the school ceased its activity for several years following the devastation of Podolia by the Poles. All his life the saint had a deep regard for the Kiev Brotherhood monastery where he was educated. In the Synodikon of the Kiev-Vydubitsk monastery is the following comment about St Theodosius: “He was a man of fine intellect, and generous to the Kiev Brotherhood monastery.”

Upon receiving his education, the future hierarch received monastic tonsure at the Kiev Caves Lavra with the name Theodosius, in honor of St Theodosius of the Caves (May 3).

Metropolitan Dionysius (Balaban) of Kiev made him archdeacon of Kiev’s cathedral of Holy Wisdom (Hagia Sophia) , and then appointed him steward of the episcopal household. Soon he left Kiev and went to the distant Krupitsky monastery near Baturino (in the Chernigov diocese), which was famed for its strict monastic life. There he was ordained to the holy priesthood, but remained there only a short time.

In 1662, St Theodosius was appointed Igumen of the Korsun monastery in Kiev diocese, and in the year 1664 he was made head of the ancient Kiev-Vydubitsky monastery. This monastery had fallen into the hands of the Uniates and Poles at the beginning of the seventeenth century and was in complete ruin. Thanks to the energy and initiative of St Theodosius, the Vydubitsky Mikhailovsk monastery was quickly restored.

He was particularly concerned with the order of church services. He formed an excellent choir, which was famed not only in Little Russia, but also in Moscow. St Theodosius sent his singers to Moscow in 1685 to instruct their choirs in Kievan chant.

As a strict ascetic himself, St Theodosius was concerned with the spiritual growth of his monks. He founded a small skete on the island of Mikhailovschina, not far from the monastery, for brethren wishing to live in solitude. He appointed the hieromonk Job (Opalinsky), one of the most zealous monks of his monastery, to organize and administer the skete.

St Theodosius had to live through some quite difficult days, enduring many sorrows. He and other Igumens were accused by Bishop Methodius of Mstislav and Orshansk of betraying Russia in a supposed correspondence with the enemies of Russia.

On September 20, 1668 St Theodosius explained the matter. On November 17, 1668 the lie was exposed, and St Theodosius together with the other Igumens were vindicated. Archbishop Lazar (Baranovich) esteemed the high spiritual qualities of St Theodosius and befriended him. He called him “a sheep of the flock of Christ, teaching by humility,” and he prophetically expressed the wish that the name of St Theodosius might be inscribed in Heaven.

When Archbishop Lazar became locum tenens of Kiev’s Metropolitan See in 1689, he appointed St Theodosius as his vicar in Kiev, while he remained at Chernigov. In his capacity as vicar of the locum tenens of the Kiev Metropolitan See, St Theodosius had an active role in many churchly events. In 1685 he participated with the right of a decisive vote in the election of Bishop Gideon (Chetverinsky) as Metropolitan of Kiev, and he was sent to Moscow with news of this event with Igumen Jerome (Dubin) of Pereyaslavl . In Moscow, both representatives were received with honor and esteem. Indeed, the result of this delegation was the reuniting of the Kiev Metropolitan See with the Russian Orthodox Church.

In 1688 St Theodosius was appointed archimandrite of Chernigov’s Eletsy monastery, replacing the deceased Archimandrite Joannicius (Golyatovsky). In appointing St Theodosius, Archbishop Lazar told him to spare no effort in placing the Eletsy monastery in good order. This monastery had not yet been set aright after the expulsion of the Jesuits and Dominicans, and it was in great disorder.

Through the efforts of St Theodosius, in his two or three years as igumen, the monastery’s revenues and properties increased, the church of the Dormition was repaired, and the Elets Icon (February 5) was enshrined there.

In his new position, the saint also assisted Archbishop Lazar in many important matters. He participated in drafting a conciliar reply to Patriarch Joachim of Moscow in response to his questions about the attitude of the Kiev Metropolitan See to the Council of Florence, and its judgment on the question of the transformation of the Holy Gifts as accepted by this Florentine Council. When the Patriarch proved to be unsatisfied by these answers, the Baturino Igumen St Demetrius (the future Metropolitan of Rostov) was sent to him at the beginning of 1689. St Theodosius journeyed with him as the representative of Archbishop Lazar. He was entrusted with the delivery of a letter to the Patriarch, and to clear up the misunderstandings.

Because of his poor health, Archbishop Lazar wished to see St Theodosius consecrated to the episcopate, seeing in the saint a worthy successor to himself. On September 11, 1692 the election of St Theodosius as Archbishop of Chernigov was confirmed, and he was consecrated in the Dormition cathdral of the Moscow Kremlin two days later.

Little information regarding St Theodosius’s administration of the Chernigov diocese has been preserved. The saint worked incessantly to raise the level of true Christian piety in his flock. He also focused on maintaining old monasteries, and founding new communities.

At the very beginning of his episcopate, the the Pecheniksk women’s monastery was established with his blessing, and he himself consecrated the monastery church in honor of the Dormition of the Most Holy Theotokos.

In 1694, a skete was founded near Liubech. The same year, at the Domnitsky men’s monastery, the saint consecrated a temple in honor of the Nativity of the Most Holy Theotokos. In the summer of 1695, he consecrated a majestic temple in honor of the Most Holy Theotokos, on the summit of Boldino Hill, near the ancient monastery of St Elias. Under St Theodosius there was a special enthusiasm for and strengthening of monasticism in the Chernigov diocese.

The saint also devoted much attention to the clergy, and he tried to choose worthy candidates for the priesthood. He also encouraged the pastoral education of the Chernigov clergy. He invited learned monks from Kiev, among whom was St John (Maximovitch), the future Metropolitan of Tobolsk (June 10), and also a helper and successor of St Theodosius in organizing the Chernigov clergy school.

Strict uprightness in regard to clergy and flock, deep compassion, concern and Christian love of peace were distinguishing features in the activity of St Theodosius. Not only did the Orthodox turn to him for help and advice, but even persons of other confessions.

St Theodosius did not remain with his Chernigov flock very long. Sensing the approach of death, he summoned the administrator of the Briansk Svensk monastery, St John (Maximovitch), and appointed him Archimandrite of the Chernigov Elets monastery.

St Theodosius died on February 5, 1696, and was buried in Chernigov’s Sts Boris and Gleb cathedral church, in a special crypt near the right cleros. His successor St John (Maximovitch), who was healed of a grievous illness by St Theodosius, later placed a stone plaque over his grave with a poetic inscription in gratitude for the saint’s help. The special grace which St Theodosius attained is shown by his ascetic life and his assistance to all who turn to him in prayer.

The glorification of St Theodosius occurred on September 9, 1896.

Holy Hierarch Theodosius, / you were found to be most worthy among bishops / and a light to your flock when translated to the eternal mansions. / Pray at the throne of the King of Glory / that we may be delivered from all present evil / and that our souls may be saved by your prayers.
Kontakion — Tone 4

Holy Hierarch Theodosius, / you labored for Christ by grazing your rational flock in spiritual pastures; / you received the gift of healing from Christ the Savior / to cure from bodily and spiritual infirmities all those who come to your relics. / Pray for those who call on your name, / that our souls may be saved from the enemy. 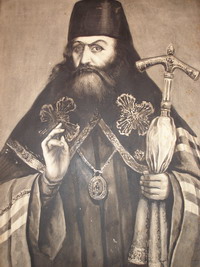