Our Holy Father Abraham the Recluse and his niece Maria 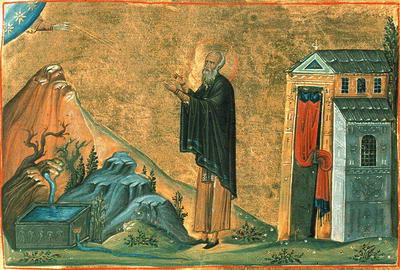 Saint Abramius the Hermit and Blessed Maria, his niece of Mesopotamia, lived the ascetic life in the village of Chidan, near the city of Edessa. They were contemporaries and fellow countrymen of St Ephraim the Syrian (January 28), who afterwards wrote about their life.

St Abramius began his difficult exploit of the solitary life in the prime of youth. He left his parents' home and settled in a desolate wilderness place, far from worldly enticements, and he spent his days in unceasing prayer. After the death of his parents, the saint refused his inheritance and requested his relatives to give it away to the poor. By his strict ascetic life, fasting, and love for mankind, Abramius attracted to him many seeking after spiritual enlightenment, prayer and blessing.

Soon his faith was put to a serious test, as he was appointed presbyter in one of the pagan villages of Mesopotamia. For three years, and sparing no efforts, the saint toiled over the enlightenment of the pagans. He tore down a pagan temple and built a church. Humbly enduring derision and even beatings from obstinate idol-worshippers, he entreated the Lord, "Look down, O Master, upon Your servant, hear my prayer. Strengthen me and set Your servants free from diabolical snares, and grant them to know You, the one true God." The zealous pastor was granted the happiness to see the culmination of his righteous efforts: the pagans came to believe in Jesus Christ, the Son of God, and St Abramius baptized them himself.

Having fulfilled his priestly duty, Abramius again withdrew into his wilderness, where he continued to glorify God, and doing His holy will. The devil, put to shame by the deeds of St Abramius, tried to entrap him with proud thoughts. Once at midnight, when St Abramius was at prayer in his cell, suddenly a light shone and a voice was heard, "Blessed are you, Abramius, for no other man has done my will as you have!" Confuting the wiles of the enemy, the saint said: "I am a sinful man, but I trust in the help and grace of my God. I do not fear you, and your illusions do not scare me." Then he ordered the devil to depart, in the name of Jesus Christ.

Another time, the devil appeared before the saint in the form of a youth, lit a candle and began to sing Psalm 118/119, "Blessed are the blameless in the way, who walk in the law of the Lord." Perceiving that this also was a demonic temptation, the Elder crossed himself and asked, "If you know that the blameless are blessed, then why trouble them?"

The temper answered, "I provoke them in order to conquer them and turn them away from every good deed." To this the saint replied, "You gain victory over those who, like yourself, have fallen away from God. You are forced to vanish, like smoke in the wind, from before the face of those who love God." After these words the devil vanished. Thus St Abramius defeated the Enemy, being strengthened by divine grace. After fifty years of ascetic life, he peacefully fell asleep in the Lord.

St Abramius's niece, the Nun Maria, grew up being edified by his spiritual instruction. Her father died when she was seven, and so she was raised by her saintly uncle. But the Enemy of the race of man tried to turn her from the true path. At twenty-seven years of age she fell into sin with a man. Thoroughly ashamed, she left her cell, went to another city and began to live in a brothel. Two years later, when he learned of this, St Abramius clad himself in soldier's garb, so that he should not be recognized, and he went to the city to find his niece. Pretending to be one of her "clients," he revealed his identity once they were alone. With many tears and exhortations, he brought her to repentance and took her back to her cell.

St Maria returned to her cell and spent the rest of her days in prayer and tears of repentance. The Lord forgave her and even granted her the gift of healing the sick. She died five years after St Abramius.

The image of God was truly preserved in you, O Father,
for you took up the Cross and followed Christ.
By so doing doing you taught us to disregard the flesh for it passes away
but to care instead for the soul, since it is immortal.
Therefore your spirit, venerable Abramius, rejoices with the angels.

You lived in the flesh on earth as an angel,
and through your ascetic life you became like a tree nourished by the waters of abstinence and flourished.
You have washed away stains with the streams of your tears
and so you have been revealed, Abramius, to be a god-like vessel of the Spirit. 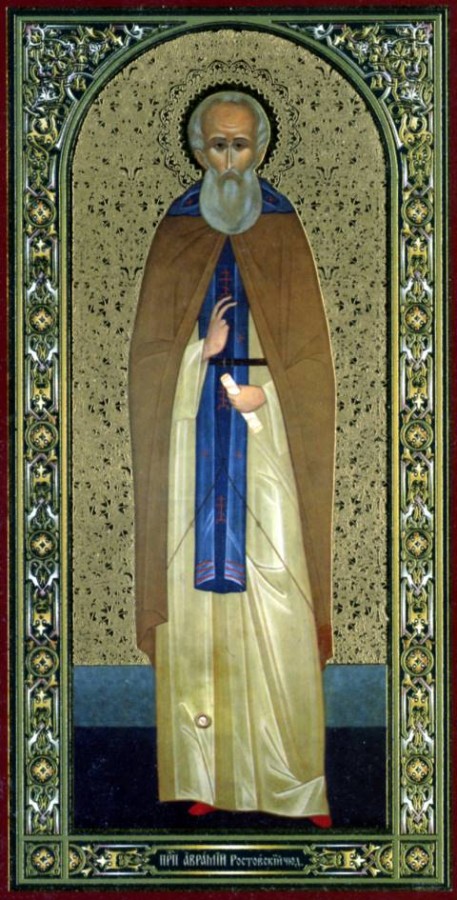