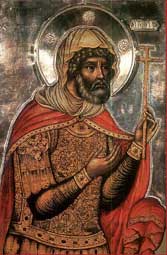 The Holy Martyr Longinus the Centurion, a Roman soldier, served in Judea under the command of the Governor, Pontius Pilate. When our Savior Jesus Christ was crucified, it was the detachment of soldiers under the command of Longinus which stood watch on Golgotha, at the very foot of the holy Cross. Longinus and his soldiers were eyewitnesses of the final moments of the earthly life of the Lord, and of the great and awesome portents that appeared at His death. These events shook the centurion's soul. Longinus believed in Christ and confessed before everyone, "Truly this was the Son of God" (Mt. 27:54).

According to Church Tradition, Longinus was the soldier who pierced the side of the Crucified Savior with a spear, and received healing from an eye affliction when blood and water poured forth from the wound.

After the Crucifixion and Burial of the Savior, Longinus stood watch with his company at the Sepulchre of the Lord. These soldiers were present at the All-Radiant Resurrection of Christ. The Jews bribed them to lie and say that His disciples had stolen away the Body of Christ, but Longinus and two of his comrades refused to be seduced by the Jewish gold. They also refused to remain silent about the miracle of the Resurrection.

Having come to believe in the Savior, the soldiers received Baptism from the apostles and decided to leave military service. St Longinus left Judea to preach about Jesus Christ the Son of God in his native land (Cappadocia), and his two comrades followed him.

The fiery words of those who had actually participated in the great events in Judea swayed the hearts and minds of the Cappadocians; Christianity began quickly to spread throughout the city and the surrounding villages. When they learned of this, the Jewish elders persuaded Pilate to send a company of soldiers to Cappadocia to kill Longinus and his comrades. When the soldiers arrived at Longinus's village, the former centurion himself came out to meet the soldiers and took them to his home. After a meal, the soldiers revealed the purpose of their visit, not knowing that the master of the house was the very man whom they were seeking. Then Longinus and his friends identified themselves and told the startled soldiers to carry out their duty.

The soldiers wanted to let the saints go and advised them to flee, but they refused to do this, showing their firm intention to suffer for Christ. The holy martyrs were beheaded, and their bodies were buried at the place where the saints were martyred. The head of St Longinus, however, was sent to Pilate.

Pilate gave orders to cast the martyr's head on a trash-heap outside the city walls. After a while a certain blind widow from Cappadocia arrived in Jerusalem with her son to pray at the holy places, and to ask that her sight be restored. After becoming blind, she had sought the help of physicians to cure her, but all their efforts were in vain.

The woman's son became ill shortly after reaching Jerusalem, and he died a few days later. The widow grieved for the loss of her son, who had served as her guide.

St Longinus appeared to her in a dream and comforted her. He told her that she would see her son in heavenly glory, and also receive her sight. He told her to go outside the city walls and there she would find his head in a great pile of refuse. Guides led the blind woman to the rubbish heap, and she began to dig with her hands. As soon as she touched the martyr's head, the woman received her sight, and she glorified God and St Longinus.

Taking up the head, she brought it to the place she was staying and washed it. The next night, St Longinus appeared to her again, this time with her son. They were surrounded by a bright light, and St Longinus said, Woman, behold the son for whom you grieve. See what glory and honor are his now, and be consoled. God has numbered him with those in His heavenly Kingdom. Now take my head and your son's body, and bury them in the same casket. Do not weep for your son, for he will rejoice forever in great glory and happiness."

The woman carried out the saint's instructions and returned to her home in Cappadocia. There she buried her son and the head of St Longinus. Once, she had been overcome by grief for her son, but her weeping was transformed into joy when she saw him with St Longinus. She had sought healing for her eyes, and also received healing of her soul.

The Church rejoices in gladness
on the day of the commemoration of the ever-memorable athlete Longinus!
She cries out: "You are my strength and support, O Christ!" 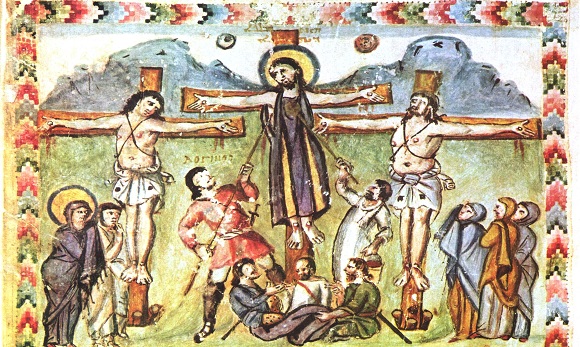 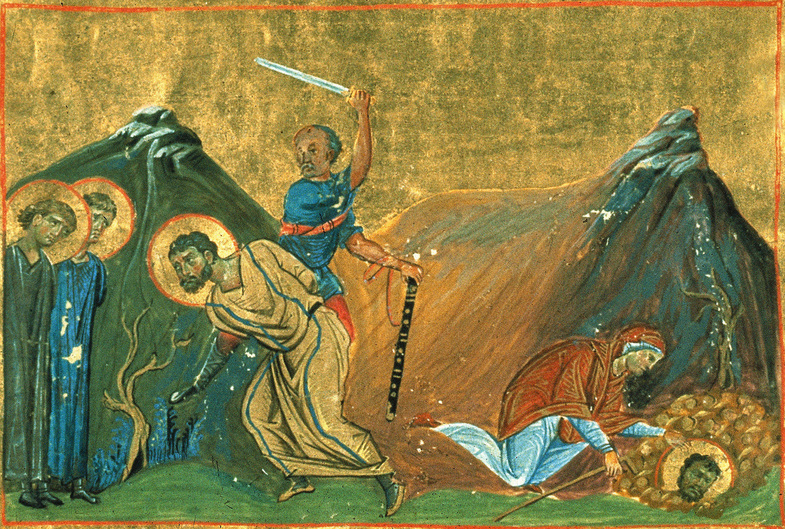