The Holy Apostle and Evangelist Luke 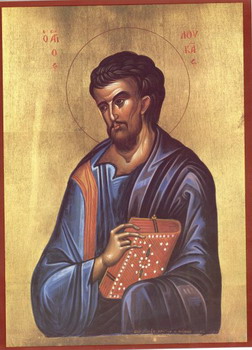 The Holy Apostle and Evangelist Luke, was a native of Syrian Antioch, a companion of the holy Apostle Paul (Phil.1:24, 2 Tim. 4:10-11), and a physician enlightened in the Greek medical arts. Hearing about Christ, Luke arrived in Palestine and fervently accepted the preaching of salvation from the Lord Himself. As one of the Seventy Apostles, St Luke was sent by the Lord with the others to preach the Kingdom of Heaven during the Savior's earthly life (Luke 10:1-3). After the Resurrection, the Lord Jesus Christ appeared to Sts Luke and Cleopas on the road to Emmaus.

Luke accompanied St Paul on his second missionary journey, and from that time they were inseparable. When Paul's coworkers had forsaken him, only Luke remained to assist him in his ministry (2 Tim. 4:10-11). After the martyric death of the First-Ranked Apostles Peter and Paul, St Luke left Rome to preach in Achaia, Libya, Egypt and the Thebaid. He ended his life by suffering martyrdom in the city of Thebes.

Tradition credits St Luke with painting the first icons of the Mother of God. "Let the grace of Him Who was born of Me and My mercy be with these Icons," said the All-Pure Virgin after seeing the icons. St Luke also painted icons of the First-Ranked Apostles Peter and Paul. St Luke's Gospel was written in the years 62-63 at Rome, under the guidance of the Apostle Paul. In the preliminary verses (1:1-3), St Luke precisely sets forth the purpose of his work. He proposes to record, in chronological order, everything known by Christians about Jesus Christ and His teachings. By doing this, he provided a firmer historical basis for Christian teaching (1:4). He carefully investigated the facts, and made generous use of the oral tradition of the Church and of what the All-Pure Virgin Mary Herself had told him (2:19, 51).

In St Luke's Gospel, the message of the salvation made possible by the Lord Jesus Christ, and the preaching of the Gospel, are of primary importance.

St Luke also wrote the Acts of the Holy Apostles at Rome around 62-63 A.D. The Book of Acts, which is a continuation of the four Gospels, speaks about the works and the fruits of the holy Apostles after the Ascension of the Savior. At the center of the narrative is the Council of the holy Apostles at Jerusalem in the year 51, a Church event of great significance, which resulted in the separation of Christianity from Judaism and its independent dissemination into the world (Acts 15:6-29). The theological focus of the Book of Acts is the coming of the Holy Spirit, Who will guide the Church "into all truth" John 16:13) until the Second Coming of Christ.

The holy relics of St Luke were taken from Constantinople and brought to Padua, Italy at some point in history. Perhaps this was during the infamous Crusade of 1204. In 1992, Metropolitan Hieronymus (Jerome) of Thebes requested the Roman Catholic bishop in Thebes to obtain a portion of St Luke's relics for the saint's empty sepulchre in the Orthodox cathedral in Thebes.

The Roman Catholic bishop Antonio Mattiazzo of Padua, noting that Orthodox pilgrims came to Padua to venerate the relics while many Catholics did not even know that the relics were there, appointed a committee to investigate the relics in Padua, and the skull of St Luke in the Catholic Cathedral of St Vico in Prague.

The skeleton was determined to be that of an elderly man of strong build. In 2001, a tooth found in the coffin was judged to be consistent with the DNA of Syrians living near the area of Antioch dating from 72-416 A.D. The skull in Prague perfectly fit the neck bone of the skelton. The tooth found in the coffin in Padua was also found to fit the jawbone of the skull.

Bishop Mattiazzo sent a rib from the relics to Metropolitan Hieronymus to be venerated in St Luke's original tomb in the Orthodox cathedral at Thebes.

Let us praise with sacred songs the holy Apostle Luke,
the recorder of the joyous Gospel of Christ
and the scribe of the Acts of the Apostles,
for his writings are a testimony of the Church of Christ:
He is the physician of human weaknesses and infirmities.
He heals the wounds of our souls,
and constantly intercedes for our salvation!

Let us praise the godly Luke:
he is the true preacher of piety,
the orator of ineffable mysteries
and the star of the Church;
for the Word, Who alone knows the hearts of men,
chose him, together with wise Paul, to be a teacher of the gentiles! 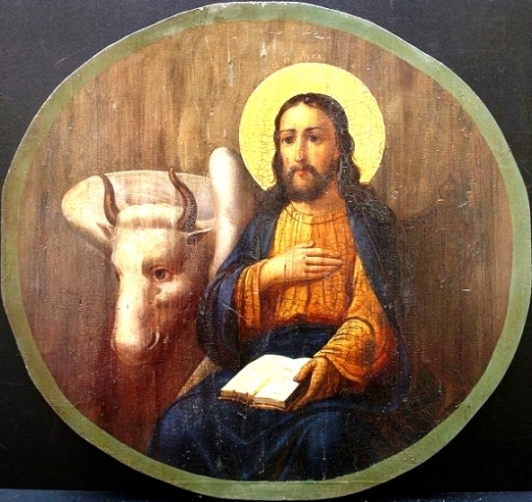