The Holy Martyrs Cosmas and Damian, the Unmercenaries 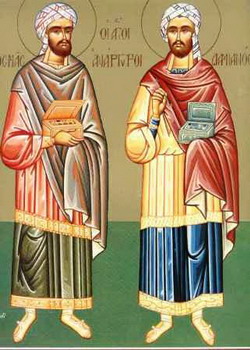 The Martyrs and Unmercenaries Cosmas and Damian in Cilicia (Arabia), and the Martyrs Leontius, Anthimus and Eutropius. The holy brothers Cosmas and Damian were physicians in Arabia, who believed in Christ. They traveled through the cities and the villages, preaching Christ and healing the sick. The saints would not take any sort of payment for the help they rendered. In Cilicia, pagans seized the holy physicians and led them before the governor, Lysias. Since they refused to renounce Christianity, the governor ordered the saints to be brutally beaten, and then cast into the sea.

An angel of God rescued them from the sea and brought them to shore. Then the pagans beheaded the saints and three other Christians: Leontius, Anthimus, and Eutropius.