+++ The Holy Archangel Michael and all the Bodiless Powers of Heaven 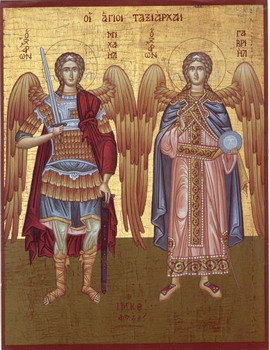 The Synaxis of the Chief of the Heavenly Hosts, Archangel Michael and the Other Heavenly Bodiless Powers: Archangels Gabriel, Raphael, Uriel, Selaphiel, Jehudiel, Barachiel, and Jeremiel was established at the beginning of the fourth century at the Council of Laodicea, which met several years before the First Ecumenical Council. The 35th Canon of the Council of Laodicea condemned and denounced as heretical the worship of angels as gods and rulers of the world, but affirmed their proper veneration.

A Feastday was established in November, the ninth month after March (with which the year began in ancient times) since there are Nine Ranks of Angels. The eighth day of the month was chosen for the Synaxis of all the Bodiless Powers of Heaven since the Day of the Dread Last Judgment is called the Eighth Day by the holy Fathers. After the end of this age (characterized by its seven days of Creation) will come the Eighth Day, and then "the Son of Man shall come in His Glory and all the holy Angels with Him" (Mt. 25:31).

The Angelic Ranks are divided into three Hierarchies: highest, middle, and lowest.

The Highest Hierarchy includes: the Seraphim, Cherubim and Thrones.

The six-winged SERAPHIM (Flaming, Fiery) (Is 6:12) stand closest of all to the Most Holy Trinity. They blaze with love for God and kindle such love in others.

The many-eyed CHERUBIM (outpouring of wisdom, enlightenment) (Gen 3:24) stand before the Lord after the Seraphim. They are radiant with the light of knowledge of God, and knowledge of the mysteries of God. Through them wisdom is poured forth, and people's minds are enlightened so they may know God and behold His glory.

The THRONES (Col 1:16) stand after the Cherubim, mysteriously and incomprehensibly bearing God through the grace given them for their service. They are ministers of God's justice, giving to tribunals, kings, etc. the capacity for righteous judgment.

DOMINIONS (Col 1:16) hold dominion over the angels subject to them. They instruct the earthly authorities, established by God, to rule wisely, and to govern their lands well. The Dominions teach us to subdue sinful impulses, to subject the flesh to the spirit, to master our will, and to conquer temptation.

POWERS (1 Pet 3:22) fulfill the will of God without hesitation. They work great miracles and give the grace of wonderworking and clairvoyance to saints pleasing to God. The Powers assist people in fulfilling obediences. They also encourage them to be patient, and give them spiritual strength and fortitude.

AUTHORITIES (1 Pet 3:22, Col 1:16) have authority over the devil. They protect people from demonic temptations, and prevent demons from harming people as they would wish. They also uphold ascetics and guard them, helping people in the struggle with evil thoughts.

PRINIPALITIES (Col 1:16) have command over the lower angels, instructing them in the fulfilling of God's commands. They watch over the world and protect lands, nations and peoples. Principalities instruct people to render proper honor to those in authority, as befits their station. They teach those in authority to use their position, not for personal glory and gain, but to honor God, and to spread word of Him, for the benefit of those under them.

ARCHANGELS (1 Thess 4:16) are messengers of great and wondrous tidings. They reveal prophecies and the mysteries of the faith. They enlighten people to know and understand the will of God, they spread faith in God among the people, illuminating their minds with the light of the Holy Gospel.

ANGELS (1 Pet 3:22) are in the lowest rank of the heavenly hierarchy, and closest to people. They reveal the lesser mysteries of God and His intentions, guiding people to virtuous and holy life. They support those who remain steadfast, and they raise up the fallen. They never abandon us and they are always prepared to help us, if we desire it.

All the Ranks of the Heavenly Powers are called angels, although each has its own name and position by virtue of their service. The Lord reveals His will to the highest ranks of the angels, and they in turn inform the others.

Over all the Nine Ranks, the Lord appointed the Holy Archangel Michael (his name in Hebrew means "who is like unto God"), the faithful servitor of God, as Chief Commander. He cast down from Heaven the arrogantly proud Lucifer and the other fallen spirits when they rebelled against God. Michael summoned the ranks of angels and cried out, "Let us attend! Let us stand aright before our Creator and do not consider doing what is displeasing unto God!"

According to Church Tradition, and in the church services to the Archangel Michael, he participated in many other Old Testament events.

During the Exodus of the Israelites from Egypt he went before them in the form of a pillar of cloud by day and a pillar of fire by night. Through him the power of the Lord was made manifest, annihilating the Egyptians and Pharaoh who were in pursuit of the Israelites. The Archangel Michael defended Israel in all its misfortunes.

He appeared to Joshua Son of Navi and revealed the will of the Lord at the taking of Jericho (Josh 5:13-16). The power of the great Chief Commander of God was manifest in the annihilation of the 185 thousand soldiers of the Assyrian emperor Sennacherib (4/2 Kings 19:35); also in the smiting of the impious leader Heliodorus (2 Macc. 3: 24-26); and in the protection of the Three Holy Youths: Ananias, Azarias and Misail, thrown into the fiery furnace for their refusal to worship an idol (Dan 3:22-25).

Through the will of God, the Chief Commander Michael transported the Prophet Habbakuk (December 2) from Judea to Babylon, to give food to Daniel in the lions' den (Dan. 14:33-37).

The Archangel Michael disputed with the devil over the body of the holy Prophet Moses (Jude 1:9).

The holy Archangel Michael showed his power when he miraculously saved a young man, cast into the sea by robbers with a stone about his neck on the shores of Mt Athos. This story is found in the Athonite Paterikon, and in the Life of St Neophytus of Docheiariou (November 9).

From ancient times the Archangel Michael was famed for his miracles in Rus. In the Volokolamsk Paterikon is a narrative of St Paphnutius of Borov with an account of Tatar tax-gatherers concerning the miraculous saving of Novgorod the Great: "Therefore Great Novgorod was never taken by the Hagarenes... when... for our sins the godless Hagarene emperor Batu devoured and set the Russian land aflame and came to Novgorod, and God and the Most Holy Theotokos shielded it with an appearance of Michael the Archangel, who forbade him to enter into it. He [Batu] was come to the Lithuanian city and came toward Kiev and saw the stone church, over the doors of which the great Archangel Michael had written and spoken to the prince his allotted fate, 'By this we have forbidden you entry into Great Novgorod'."

Intercession for Russian cities by the Most Holy Queen of Heaven always involved Her appearances with the Heavenly Hosts, under the leadership of the Archangel Michael. Grateful Rus acclaimed the Most Pure Mother of God and the Archangel Michael in church hymns. Many monasteries, cathedrals, court and merchant churches are dedicated to the Chief Commander Michael.

One of the chief temples of the city of Moscow, the burial church in the Kremlin, is dedicated to him. Numerous and beautiful icons of the Chief Commander of the Heavenly Hosts are also in his Cathedral. One of these, the Icon "Blessed Soldiery," was painted in the Dormition Cathedral of the Moscow Kremlin. The saintly soldiers, Russian princes, are depicted under the leadership of the Archangel Michael.

We invoke St Michael for protection from invasion by enemies and from civil war, and for the defeat of adversaries on the field of battle. He conquers all spiritual enemies.

Holy Scripture and Tradition give us the names of the Archangels:

Gabriel: strength (power) of God, herald and servitor of Divine omnipotence (Dan 8:16, Luke 1:26). He announces the mysteries of God.

Uriel: the fire or light of God, enlightener (3 Ezdras 5:20). We pray for him to enlighten those with darkened minds.

Selaphiel: the prayer of God, impelling to prayer (3 Ezdras 5:16). He prays to God for mankind.

Jehudiel: the glorifying of God, encouraging exertion for the glory of the Lord and interceding for the reward of efforts.

Barachiel: distributor of the blessings of God for good deeds, entreats the mercy of God for people.

On icons the Archangels are depicted in according to the character of their service:

Michael tramples the devil underfoot, and in his left hand holds a green date-tree branch, and in his right hand a spear with a white banner (or sometimes a fiery sword), on which is outlined a scarlet cross.

Gabriel with a branch from Paradise, presented by him to the Most Holy Virgin, or with a shining lantern in his right hand and with a mirror made of jasper in his left.

Raphael holds a vessel with healing medications in his left hand, and with his right hand leads Tobias, carrying a fish for healing (Tobit 5-8).

Uriel in his raised right hand holds a naked sword at the level of his chest, and in his lowered left hand "a fiery flame."

Selaphiel in a prayerful posture, gazing downwards, hands folded on the chest.

Jehudiel holds a golden crown in his right hand, in his left, a whip of three red (or black) thongs.

Barachiel is shown with a white rose on his breast.

Jeremiel holds balance-scales in his hand.

Commanders of the heavenly hosts,
we who are unworthy beseech you,
by your prayers encompass us beneath the wings of your immaterial glory,
and faithfully preserve us who fall down and cry to you:
"Deliver us from all harm, for you are the commanders of the powers on high!"

Commanders of God's armies and ministers of the divine glory,
princes of the bodiless angels and guides of mankind,
ask for what is good for us, and for great mercy,
supreme commanders of the Bodiless Hosts. 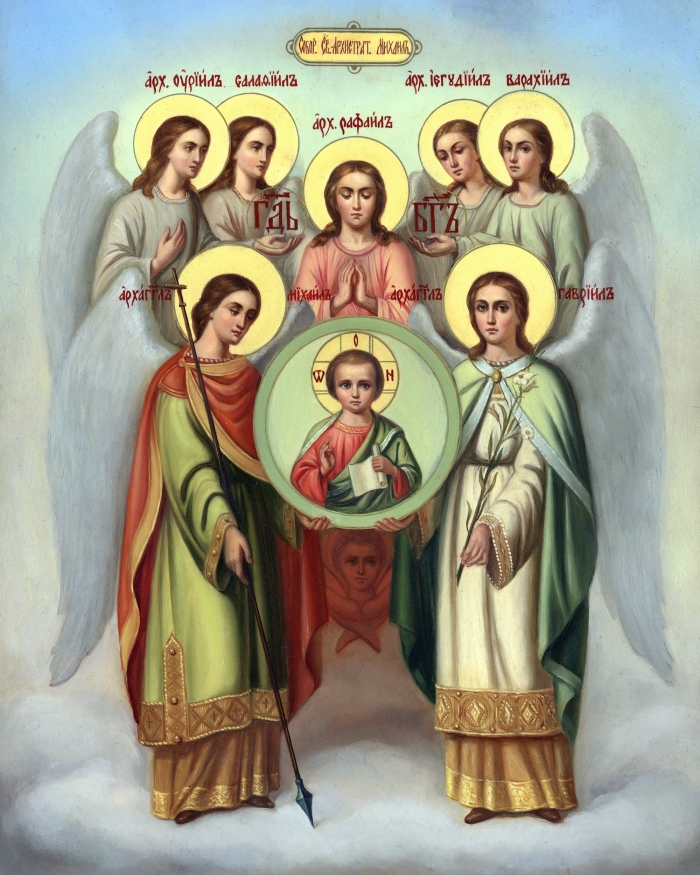 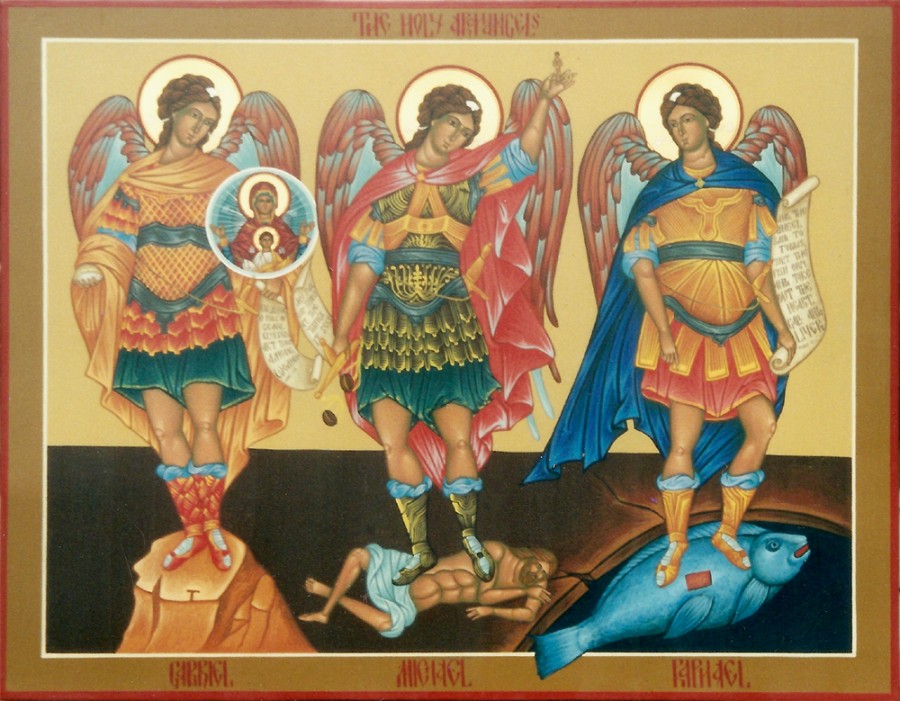