The Holy Martyr Hieron with his Companions 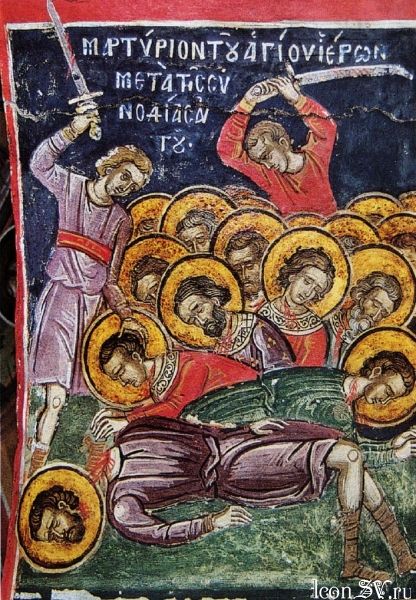 The Holy Martyr Hieron of Melitene and Those with him The holy martyr Hieron was born in the city of Tiana in great Cappadocia. Raised by a pious mother, he was a kindly and good Christian.

The co-ruling emperors Diocletian (284-305) and Maximian (284-305)sent a large military detachment headed by Lysias to Cappadocia to eradicate Christianity there, and also to conscript healthy and strong men into the imperial army. Among those pressed into service, Lysias also ordered his men to draft Hieron, who was distinguished by his great physical strength and dexterity. But Hieron refused to serve emperors who persecuted Christians. When they attempted to seize him by force and bring him to Lysias, he took a stick and started beating the soldiers who had been sent to bring him. The soldiers scattered, ashamed of being defeated by a single man. Hieron then hid himself in a cave with eighteen other Christians. Lysias would not risk losing his soldiers by storming the cave.

Upon the advice of Cyriacus, one of Hieron's friends, Lysias lifted the siege of the cave and withdrew his detachment. Then Cyriacus persuaded Hieron not to offer resistance to the authorities. He and the other new conscripts and accompanying soldiers were sent to the nearby city of Melitene.

Soon Hieron had a vision in his sleep, in which his impending martyrdom was foretold. Lysias told the soldiers gathered at Melitene to offer sacrifice to the pagan gods. Hieron and another thirty-two soldiers refused to do this, and openly confessed their faith in Christ. Then the persecutor gave orders to beat the martyrs, and to cut off Hieron's arm at the elbow. After cruel tortures they threw the martyrs into prison barely alive, and they beheaded them four days later.

A certain rich and illustrious Christian by the name of Chrysanthus ransomed Hieron's head from Lysias. When the persecutions finally ceased, he built a church on the place where they executed the holy martyrs, and he placed the venerable head in it. The bodies of all the executed saints were secretly buried by Christians. In reign of the emperor Justinian, during the construction of the church of Hagia Eirene (Holy Peace), the venerable relics were uncovered and found incorrupt.

Your thirty-three holy martyrs, O Lord,
through their sufferings have received incorruptible crowns from You, our God.
For having Your strength, they laid low their adversaries,
and shattered the powerless boldness of demons.
Through their intercessions, save our souls!

The radiant choir of martyrs, the light-bearing company,
spiritually descends to us, enlightening the Church with brilliant rays.
Therefore as we celebrate their honored memory,
we ask You, our Savior:
through their prayers deliver us from misfortunes
so that we may sing to You: "Alleluia."