Our Holy Father Varlaam of Chutinsk, the Wonderworker 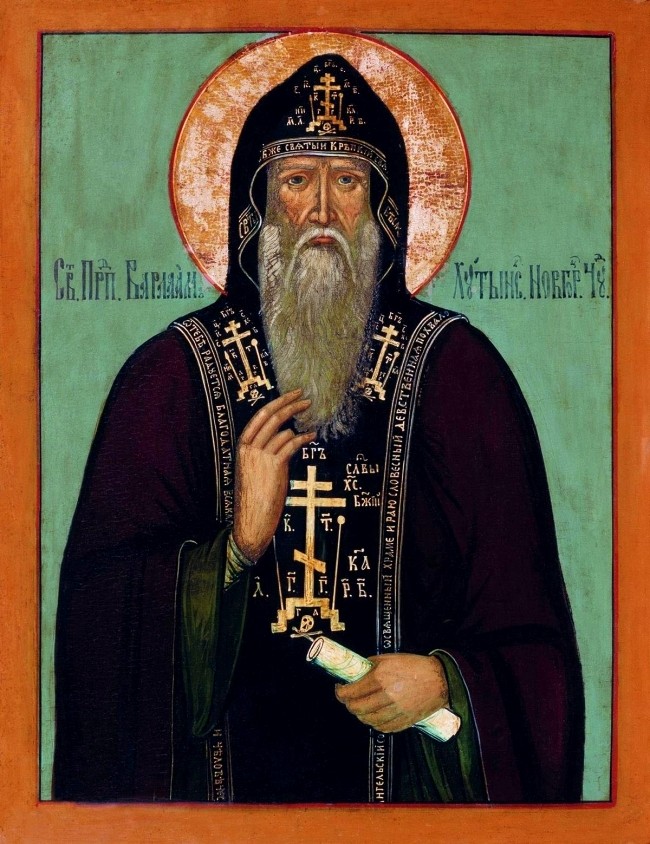 Saint Barlaam, Abbot of Khutyn lived in the twelfth century, the son of an illustrious citizen of Novgorod, where he spent his childhood years. Withdrawing at an early age to the Lisich monastery near the city, St Barlaam was tonsured there. Later he settled on a solitary hill below Volkhov, in a place called Khutyn, ten versts from Novgorod.

St Barlaam led a strict solitary life, occupying himself with unceasing prayer and keeping a very strict fast. He was a zealous ascetic in his labors: he cut timber in the forest, chopped firewood and tilled the soil, fulfilling the words of Holy Scripture, "If anyone will not work, neither shall he eat" (2 Thess. 3: 10).

Certain inhabitants of Novgorod gathered around him, wanting to share in monastic works and deeds. Instructing those who came, St Barlaam said, "My children, beware of all unrighteousness, and do not give in to envy or slander. Refrain from anger, and do not practice usury. Beware of unjust judgment. Do not swear an oath falsely, but rather fulfill it. Do not indulge the bodily appetites. Always be meek and bear all things with love. This virtue is the beginning and root of all good."

Soon a church was built in honor of the Transfiguration of the Lord, and a monastery founded. Because of his service to others, the Lord granted St Barlaam the gifts of wonderworking and discernment.

When St Barlaam's life was drawing to a close, the hieromonk Anthony came from Constantinople by divine Providence. He was of the same age and a friend of St Barlaam. The saint turned to him and said, "My beloved brother! God's blessings rest upon this monastery. Now I leave this monastery in your hands. Watch over it and care for it. Although in the flesh I am leaving you, I shall always be with you in spirit." After instructing the brethren, commanding them to preserve the Orthodox Faith and to dwell constantly in humility, St Barlaam fell asleep in the Lord on November 6, 1192.

In Slavonic practice, St Barlaam is commemorated during the Proskomedia along with the venerable and God-bearing Fathers who shone forth in asceticism (sixth particle).