The Hieromartyrs Nicander, Bishop of Myra, and Hermas the Priest

The Hieromartyrs Nicander, Bishop of Myra, and Hermas the Presbyter, were disciples of the holy Apostle Paul's follower and fellow ascetic, the holy Apostle Titus of the Seventy (August 25), and they were ordained by him to the priesthood.

Living the ascetic life amid incessant pastoral works, the saints converted many pagans to Christ. For this they were arrested and brought before the city prefect, Libanius. Neither flattery nor threats swayed the holy martyrs to renounce Christ. Then Libanius gave orders that they be tortured.

The saints endured fierce and inhuman torments: they were tied to horses and dragged over stones, their bodies were raked with iron hooks, and they were cast into a hot oven. The Lord helped them endure things that a mere man by his own strength could not endure. Towards the end, iron nails were hammered into their heads and hearts. They were thrown into a pit, then covered over with earth.

After enduring such a cruel death, now they live forever in the joy of the Lord (Mt. 25:21).

In your manner a participant,
And in your throne a successor of the Apostles,
You discovered action an entrance into visions,
O inspired one of God.
Therefore directing the Word of truth,
You suffered for the faith even unto blood.
O Bishop and Martyr Nicander, pray to Christ God that our souls may be saved! 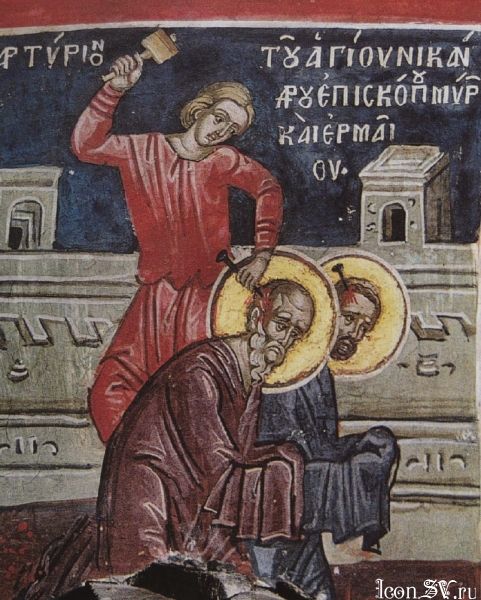