Our Holy Father Joannicius the Great 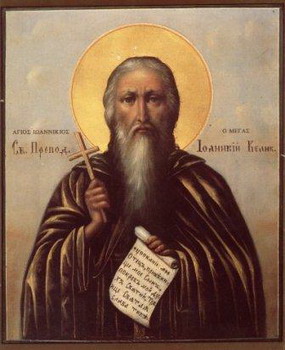 Saint Joannicius the Great was born in Bithynia in the year 752 in the village of Marikat. His parents were destitute and could not provide him even the basics of an education. From childhood he had to tend the family cattle, their sole wealth. Love for God and prayer completely dominated the soul of the child Joannicius. Often, having shielded the herd with the Sign of the Cross, he went to a secluded place and spent the whole day praying, and neither thieves nor wild beasts came near his herd.

By order of the emperor Leo IV (775-780), a multitude of officials went through the cities and towns to draft young men for military service. Young Joannicius was also drafted into the imperial army. He earned the respect of his fellow soldiers for his good disposition, but he was also a brave soldier who struck fear in the hearts of his enemies. St Joannicius served in the imperial army for six years. More than once he was rewarded by his commanders and the emperor. But military service weighed heavily on him, his soul thirsted for spiritual deeds and solitude.

St Joannicius, having renounced the world, longed to go at once into the wilderness. However, on the advice of an Elder experienced in monastic life, he spent a further two years at the monastery. Here the saint became accustomed to monastic obedience, to monastic rules and practices. He studied reading and writing, and he learned thirty Psalms of David by heart.

After this, commanded by God to go to a certain mountain, the monk withdrew into the wilderness. For three years he remained in deep solitude in the wilderness, and only once a month a shepherd brought him some bread and water. The ascetic spent day and night in prayer and psalmody. After each verse of singing the Psalms St Joannicius made a prayer, which the Orthodox Church keeps to this day in a somewhat altered form, "The Father is my hope, the Son is my refuge, the Holy Spirit is my protection."

By chance, he encountered some of his former companions from military service. The saint fled the wilderness and withdrew to Mount Kountourea to hide himself from everyone. Only after twelve years of ascetic life did the hermit accept monastic tonsure. The saint spent three years in seclusion after being tonsured. wrapped in chains, Then he went to a place called Chelidon to see the great ascetic St George (February 21). The ascetics spent three years together. During this time St Joannicius learned the entire Psalter by heart. As he grew older, St Joannicius settled in the Antidiev monastery and dwelt there in seclusion until his death.

St Joannicius spent seventy years in ascetic deeds and attained to a high degree of spiritual perfection. Through the mercy of God the saint acquired the gift of prophecy, as his disciple Pachomius has related. The Elder also levitated above the ground when he prayed. Once, he crossed a river flooded to overflowing. The saint could make himself invisible for people and make others also hidden from sight.

Once, St Joannicius led Greek captives out of prison under the very eyes of the guards. Poison and fire, with which the envious wanted to destroy the saint, did him no harm, and predatory beasts did not touch him. He freed the island of Thasos from a multitude of snakes. St Joannicius also saved a young nun who was preparing to leave the monastery to marry; he took upon himself the agonized maiden's suffering of passion, and by fasting and prayer, he overcame the seductive assault of the devil.

Foreseeing his death, St Joannicius fell asleep in the Lord on November 4, 846, at the age of 94.

By a flood of tears you made the desert fertile,
And your longing for God brought forth fruits in abundance.
By the radiance of miracles you illumined the whole universe!
O our holy father Joannicius, pray to Christ our God to save our souls!

Today we celebrate together your honored memory,
And we faithfully beseech you, O holy Joannicius
That we may find mercy with the Lord!