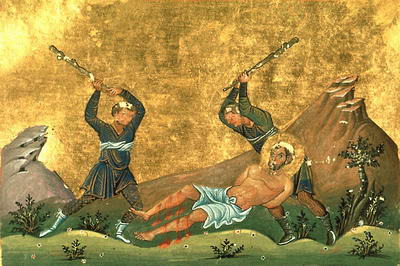 Saint Onesimus, Apostle of the Seventy in his youth was a servant of Philemon, a Christian of distinguished lineage, living in the city of Colossae, Phrygia. Guilty of an offense against his master and fearing punishment, St Onesimus fled to Rome, but as a runaway slave he wound up in prison. In prison he encountered the Apostle Paul, was enlightened by him, and was baptized.

In prison St Onesimus served the Apostle Paul like a son. St Paul was personally acquainted with Philemon, and wrote him a letter filled with love, asking him to forgive the runaway slave and to accept him like a brother. He sent St Onesimus with this letter to his master, depriving himself of help, of which he was very much in need.

After he received the letter, St Philemon not only forgave Onesimus, but also sent him back to Rome to the apostle. St Philemon was afterwards consecrated bishop of the city of Gaza (January 4, February 19, and November 22).

After the death of the Apostle Paul, St Onesimus served the apostles until their end, and he was made a bishop. After the death of the holy apostles he preached the Gospel in many lands and cities: in Spain, Carpetania, Colossae, Patras. In his old age, St Onesimus occupied the bishop's throne at Ephesus, after the Apostle Timothy. When they took St Ignatius the God-Bearer (December 20) to Rome for execution, Bishop Onesimus came to meet with him with other Christians, as St Ignatius mentions in his Epistle to the Ephesians.

During the reign of the emperor Trajan (89-117), St Onesimus was arrested and brought to trial before the eparch Tertillus. He held the saint in prison for eighteen days, and then sent him to prison in the city of Puteoli. After a certain while, the eparch sent for the prisoner and, convincing himself that St Onesimus maintained his faith in Christ, had him stoned, after which they beheaded the saint with a sword. A certain illustrious woman took the body of the martyr and placed it in a silver coffin. This took place in the year 109.

Like a beam of light you shone on the world,
illumined by Paul, the all-radiant sun, whose rays enlighten the world.
Therefore we honor you, glorious Onesimus. 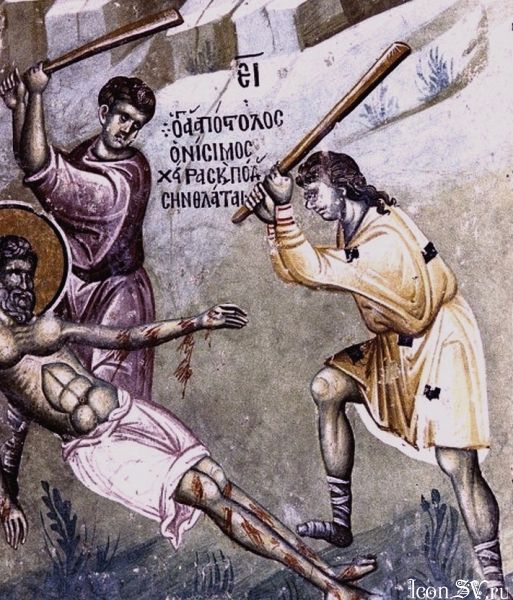