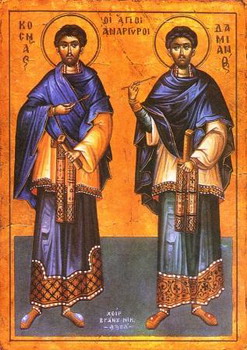 The Holy Wonderworkers and Unmercenary Physicians Cosmas and Damian and their mother St Theodota were natives of Asia Minor (some sources say Mesopotamia). Their pagan father died while they were still quite small children. Their mother raised them in Christian piety. Through her own example, and by reading holy books to them, St Theodota preserved her children in purity of life according to the command of the Lord, and Cosmas and Damian grew up into righteous and virtuous men.

Trained and skilled as physicians, they received from the Holy Spirit the gift of healing people's illnesses of body and soul by the power of prayer. They even treated animals. With fervent love for both God and neighbor, they never took payment for their services. They strictly observed the command of our Lord Jesus Christ, "Freely have you received, freely give." (Mt. 10:8). The fame of Sts Cosmas and Damian spread throughout all the surrounding region, and people called them unmercenary physicians.

Once, the saints were summoned to a grievously ill woman named Palladia, whom all the doctors had refused to treat because of her seemingly hopeless condition. Through faith and through the fervent prayer of the holy brothers, the Lord healed the deadly disease and Palladia got up from her bed perfectly healthy and giving praise to God. In gratitude for being healed and wishing to give them a small gift, Palladia went quietly to Damian. She presented him with three eggs and said, "Take this small gift in the Name of the Holy Life-Creating Trinity, the Father, Son, and Holy Spirit." Hearing the Name of the Holy Trinity, the unmercenary one did not dare to refuse.

When St Cosmas learned what had happened, became very sad, for he thought that his brother had broken their strict vow. On his deathbed he gave instructions that his brother should not be buried beside him. St Damian also died shortly afterward, and everyone wondered where St Damian's grave should be. But through the will of God a miracle occurred. A camel, which the saints had treated for its wildness, spoke with a human voice saying that they should have no doubts about whether to place Damian beside Cosmas, because Damian did not accept the eggs from the woman as payment, but out of respect for the Name of God. The venerable relics of the holy brothers were buried together at Thereman (Mesopotamia).

Many miracles were worked after the death of the holy unmercenaries. There lived at Thereman, near the church of Cosmas and Damian, a certain man by the name of Malchus. One day he went on a journey, leaving his wife all alone for what would be a long time. He prayerfully entrusted her to the heavenly protection of the holy brothers. But the Enemy of the race of mankind took on the appearance of one of Malchus' friends, and planned to kill the woman. A certain time went by, and this man went to her at home and said that Malchus had sent him to bring her to him. The woman believed him and went along. He led her to a solitary place intending to kill her. The woman, seeing that disaster threatened her, called upon God with deep faith.

Two fiercesome men then appeared, and the devil let go of the woman and fled, falling off a cliff. The two men led the woman home. At her own home, bowing to them deeply she asked, " My rescuers, to whom I shall be grateful to the end of my days, what are your names?"

They replied, "We are the servants of Christ, Cosmas and Damian," and became invisible. The woman with trembling and with joy told everyone about what had happened to her. Glorifying God, she went up to the icon of the holy brothers and tearfully offered prayers of thanksgiving for her deliverance. And from that time the holy brothers were venerated as protectors of the holiness and inviolability of Christian marriage, and as givers of harmony to conjugal life. From ancient times, their veneration spread also to Russia.

Holy unmercenaries and wonderworkers, Cosmas and Damian,
heal our infirmities.
Freely you have received; freely you give to us.

Having received the grace of healing,
you grant healing to those in need.
Glorious wonder workers and healers, Cosmas and Damian,
visit us and put down the insolence of our enemies,
and bring healing to the world through your miracles. 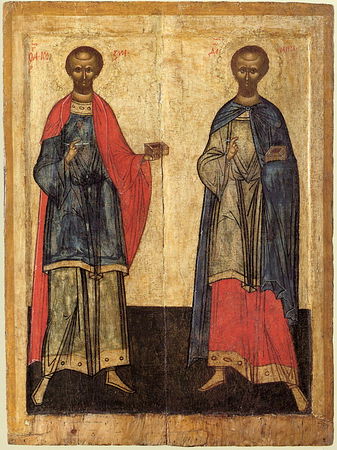