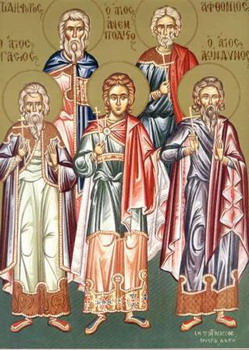 Saint Acindynus suffered martyrdom in Persia along with Sts Pegasias, Aphthonius, Elpidephorus, Anempodistus, and 7,000 and 7,000 other Christians at the time of King Sapor II (310-381). These saints were Sapor's courtiers, and were secret Christians. When the king began his persecution against Christians, envious pagans denounced them to him. Summoned to Sapor's presence for trial, the holy martyrs fearlessly confessed their faith in the Holy Trinity. The king ordered them to be beaten with whips.

Sapor told the people that Sts Acindynus, Pegasias, Anempodistus and Elpidephorus would have their heads cut off, and that he would not permit the Christians to bury their bodies.

A tremendous crowd accompanied these saints as they were led outside the city walls for execution, glorifying Christ. On Sapor's orders, soldiers massacred all the Christians in the procession (about 7,000), including St Elpidephorus.

Acindynus, Pegasias, and Anempodistus were burned on the following day with the mother of the emperor. Christians, came secretly by night to the place of execution, found the bodies of the holy martyrs unharmed by the fire, and they buried them with reverence.

Blessed is the earth that received your blood, Passion-bearers of the Lord,
and holy is the dwelling place which received your spirits.
You triumphed over the enemy in the stadium
and you preached Christ with boldness.
Since He is good, we pray that you beseech Him to save our souls.

You have received into the enjoyment of Your goodness and repose, O only Good One,
the pious and God-bearing martyrs, who abandoned all earthly things:
Akindynus, Pegasius, and Anempodistus,
together with Aphthonius and Elpidephorus. 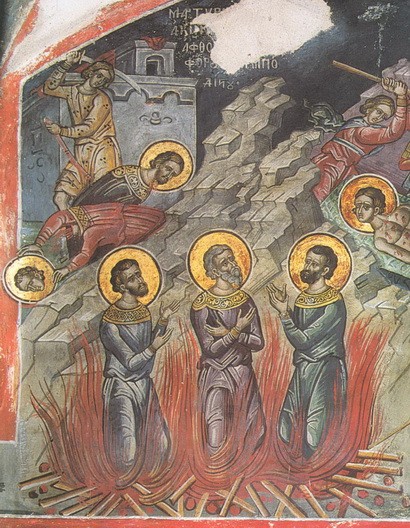