The Transfer of the Relics of Saint Hilarion, Bishop of Meglin, to the Bulgarian city of Trnovo, occurred in the year 1206. Prior to this event, the body of the saint rested in the city of Meglin.

St Hilarion received a fine Christian upbringing. At eighteen, he entered a monastery. Because of his virtuous and strict life he was chosen to be igumen of the monastery. He was very concerned about the salvation of the monks' souls. He unceasingly exhorted those souls entrusted to him not to waste precious time intended to prepare for salvation. Particularly persistent, Hilarion eradicated drunkenness in the monastery.

In 1134, when the Bogomil heresy was spreading through Bulgaria, he was consecrated bishop of Meglin. The followers of the heresy believed that "good and evil manifest themselves as independent principles, and a struggle between the two ensues." St Hilarion tirelessly fought against the Bogomils with apostolic zeal and fervent prayer. He continually unmasked their heresy and exposed their hypocritical guise of piety. In refuting the teaching of the heretics, St Hilarion said:

"You are not Christians at all,
since you are hostile to
the Cross of Christ the Savior.
You do not acknowledge the One God,
you slander the teachings of the
Old Testament venerated by Christians.
You deceive people by hypocritical
meekness while full of pride.
True piety is not possible in those
who do not see their own heart's corruption,
but by those who ask God's grace
with prayer and humility.
Evil thoughts, envy, vanity, greed, lies
are not the deed of some evil thing within
man to be conquered by mere fasting.
These vices are the fruit of self- love
which demands rooting out by spiritual efforts."

Because of the saint's exhortations many of the heretics abandoned their false teaching and returned to the holy Church. St Hilarion also successfully struggled against the rise of the Armenian Monophysite heretics in Bulgaria, who acknowledged only the divine nature of Christ. The saint fell asleep in the Lord in 1164. 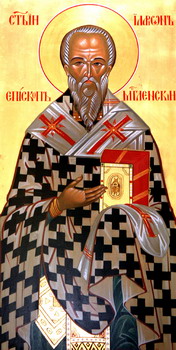