Our Holy Father Hilarion the Great 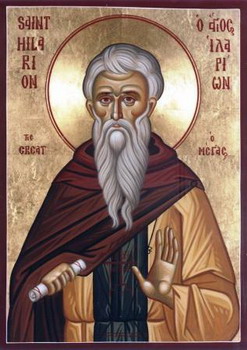 Saint Hilarion the Great was born in the year 291 in the Palestinian village of Tabatha. He was sent to Alexandria to study. There he became acquainted with Christianity and was baptized. After hearing an account of the angelic life of St Anthony the Great (January 17), Hilarion went to meet him, desiring to study with him and learn what is pleasing to God. Hilarion soon returned to his native land to find that his parents had died. After distributing his family's inheritance to the poor, Hilarion set out into the desert surrounding the city of Maium.

In the desert the monk struggled intensely with impure thoughts, vexations of the mind and the burning passions of the flesh, but he defeated them with heavy labor, fasting and fervent prayer. The devil sought to frighten the saint with phantoms and apparitions. During prayer St Hilarion heard children crying, women wailing, the roaring of lions and other wild beasts. The monk perceived that it was the demons causing these terrors in order to drive him away from the wilderness. He overcame his fear with the help of fervent prayer. Once, robbers fell upon St Hilarion, and he persuaded them to forsake their life of crime through the power of his words.

Soon all of Palestine learned about the holy ascetic. The Lord granted to St Hilarion the power to cast out unclean spirits. With this gift of grace he loosed the bonds of many of the afflicted. The sick came for healing, and the monk cured them free of charge, saying that the grace of God is not for sale (MT 10:8).

Such was the grace that he received from God that he could tell by the smell of someone's body or clothing which passion afflicted his soul. They came to St Hilarion wanting to save their soul under his guidance. With the blessing of St Hilarion, monasteries began to spring up throughout Palestine. Going from one monastery to another, he instituted a strict ascetic manner of life.

About seven years before his death (+ 371-372) St Hilarion moved back to Cyprus, where the ascetic lived in a solitary place until the Lord summoned him to Himself.

By a flood of tears you made the desert fertile,
and your longing for God brought forth fruits in abundance.
By the radiance of miracles you illumined the whole universe!
Our Father Hilarion pray to Christ God to save our souls!

Podoben: “Today the Virgin…”
Today we gather to praise you with hymns,
O unfading light of the Spiritual Sun;
for you illumined those in the darkness of ignorance,
leading all to the heights of God, as they cried:
“Rejoice, Father Hilarion, rampart of ascetics.”