St Abercius, Equal to the Apostles 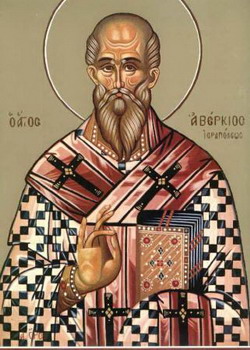 Saint Abercius, Bishop and Wonderworker of Hieropolis lived in the second century in Phrygia. The city of Hieropolis was inhabited by many pagans and very few Christians. The saint prayed to the Lord for the salvation of their souls and that they might be numbered among God's chosen flock. An angel appeared and bade St Abercius to destroy the idols in the pagan temple. He fulfilled the command of God with zeal. Hearing that the idol-worshippers wanted to kill him, the saint went to the place where the people had gathered and openly denounced the failings of the pagans. The pagans tried to seize the saint.

At this moment three demon-possessed youths in the crowd cried out. The people were dumbfounded, as the saint expelled the devils from them by his prayers. Seeing the youths restored to normal, the people of Hieropolis asked St Abercius to instruct them in the Christian Faith, and then they accepted Holy Baptism.

After this the saint went to the surrounding cities and villages, healing the sick and preaching the Kingdom of God. With his preaching he made the rounds of Syria, Cilicia, Mesopotamia, he visited Rome and everywhere he converted multitudes of people to Christ. For many years he guarded the Church against heretics, he confirmed Christians in the Faith, he set the prodigal upon the righteous path, he healed the sick and proclaimed the glory of Christ. Because of his great works, St Abercius is termed "Equal of the Apostles."

St Abercius returned home to Hieropolis, where he soon rested from his labors. After his death, many miracles took place at his tomb. He wrote his own epitaph, and it was carved on his tombstone, which is now in the Lateran Museum.

You appeared to your flock as a rule of faith,
An Image of humility and a teacher of abstinence.
Because of your lowliness, Heaven was opened to you,
Because of your poverty, riches were granted to you.
O Holy Bishop Abercius, pray to Christ our God to save our souls!

You emulated the zeal of the Apostles
and shone forth like a morning star,
and your works showed your God-given power:
you guided the erring to God,
O hierarch Abércius.

All the Church honors you, Abercius,
The Great Bishop equal to the Apostles!
O blessed one worthy of all praise,
Through your intercession
Keep the Church victorious, calm and unshaken.

The whole Church honors you as a great hierarch
and as a companion to the Apostles.
By your prayers keep the Church unconquered and unshaken by heresy, glorious Abércius.