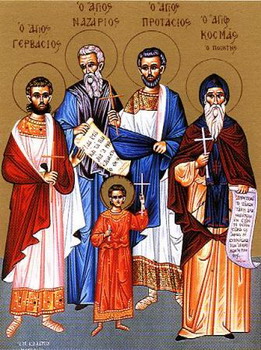 The Holy Martyrs Nazarius, Gervasius, Protasius and Celsius of Milan suffered during the reign of the emperor Nero (54-68). St Nazarius (son of the Christian Perpetua and the Jew Africanus) was born at Rome and was baptized by Bishop Linus. From his youth Nazarius decided to devote his life to preaching Christ and to aid wandering Christians. With this intent he left Rome and arrived in Mediolanum (Milan).

St Nazarius met Protasius and Gervasius when he was visiting Christians in the Mediolanum prison. He so loved the twins that he wanted to suffer and die with them. The ruler heard that he was visiting the prisoners, so he had St Nazarius beaten with rods, then driven from the city.

St Nazarius proceeded to Gaul (modern France), and there he successfully preached Christianity and converted many pagans. In the city of Kimel he baptized Celsius, the son of a Christian woman who entrusted her child to the saint. Nazarius raised the boy in piety, and acquired a faithful disciple and coworker in his missionary labors.

The pagans threw the saints to wild animals to be eaten, but the beasts would not touch them. Afterwards, they tried to drown the martyrs in the sea, but they walked upon the water as if on dry land. The soldiers who carried out the orders were so amazed that they themselves accepted Christianity and released the holy martyrs.

Sts Nazarius and Celsius went to Milan and visited Gervasius and Protasius in prison. For this, they were brought before Nero, who ordered that Sts Nazarius and Celsius be beheaded. Soon after this the holy brothers Gervasius and Protasius were also executed. The relics of all four martyrs were stolen by a Christian named Philip, and were buried in his house.

Many years later, during the reign of the holy Emperor Theodosius (408-450), St Ambrose, Bishop of Milan (December 7), discovered the relics of Sts Gervasius and Protasius through a revelation from God.

In the reign of Arcadius and Honorius, St Ambrose also discovered the relics of Sts Nazarius and Celsius. The holy relics, glorified by many healings, were solemnly transferred to the Milan cathedral.

Let us praise the fourfold company of martyrs:
Nazarius, Protase, Gervase and Celsus.
For they preached the Trinity to all
And by their contest dispelled the worship of idols.
Through their prayers, O Christ God, have mercy on us all. 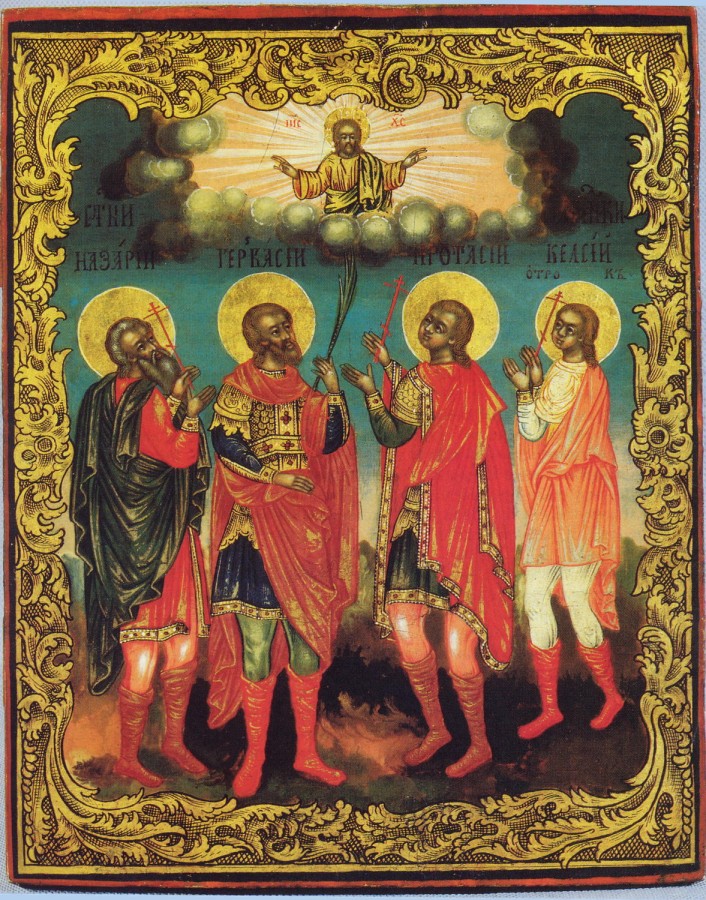