The Holy Martyr Zlata of Meglin 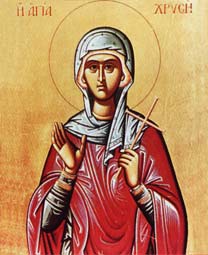 New Martyr Zlata (Chryse) This "golden vessel of virginity and undefiled bride of Christ," was born in the village of Slatena, Meglena diocese, on the border of Bulgaria and Serbia, while Bulgaria was under the Turkish Yoke.

From her youth Zlata displayed an unusually strong character, a firm faith in Christ, and was both chaste and beautiful. A certain Turk was obsessed with her, and seized her one day as she was gathering wood. He carried her off to his house, and repeatedly tried to seduce the maiden and force her to accept Islam. Since persuasion did not work, he began to threaten her with grievous tortures.

The glorious martyr was not frightened by these threats, but said she would never deny Christ no matter what they did to her. For six months the impious Hagarenes tried to make Zlata accept their religion, but she remained steadfast. Then they ordered the saint's parents and sisters to convince her to become a Moslem. Otherwise, they said, they would kill Zlata and torture them.

When the Moslems saw that they could not weaken the resolve of the saint, they tormented her for three months, beating her with clubs. Later, they peeled strips of skin from her body so that the earth was reddened by her blood. Then they heated a skewer and passed it through her ears.

Nearby was her spiritual Father, the hieromonk Timothy of Stavronikita Monastery on Mt. Athos. She sent word to him to pray that she would successfully complete the course of martyrdom. It was he who recorded her martyrdom.

Finally, the Moslems fell into a fury at having been conquered by a woman, so they tied her to a tree and cut her to pieces with their knives. Her pure soul was received by Christ, Who bestowed on her the double crowns of virginity and martyrdom. Certain Christians gathered her relics secretly and buried them with reverence. St Zlata suffered for Christ in the year 1795. 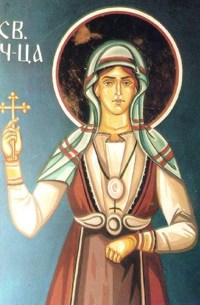 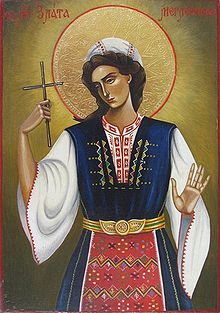