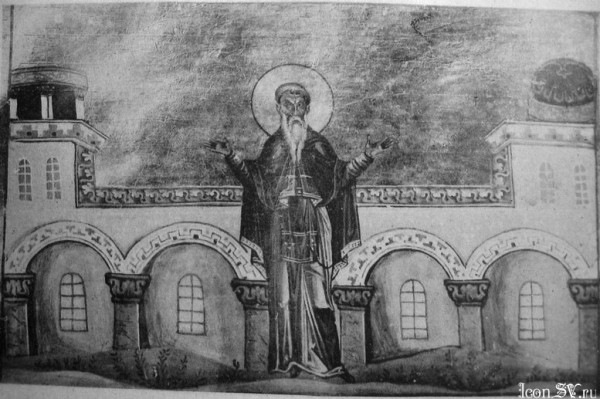 26 Monkmartyrs of the Zographou Monastery on Mount Athos In the year 1274 at the Council of Lyons (in France), the Byzantine emperor Michael VIII Paleologos decided to buttress his waning power by forming a union with Catholic Rome. This step evoked universal discontent. In 1278, the emperor issued a decree to introduce the Union at Constantinople by forceful measures, if necessary.

Mt. Athos stood in firm opposition to the Union. The Athonite monks sent a letter to Michael pointing out that the primacy of the Pope, his commemoration in the churches, celebrating the Eucharist with unleavened bread, the insertion of the "filioque" ["and from the Son"] into the Creed, could not be accepted by Orthodox, and they asked the emperor to change his mind. "We clearly see," the letter said, "that you are becoming a heretic, but we implore you to forsake all this and abide in the teachings that were handed down to you.... Reject the unholy and novel teachings of a false knowledge, speculations, and additions to the Faith."

The Crusaders pushed out of Palestine and finding refuge in the Byzantine Empire, declared to the emperor their readiness to affirm the power of the Pope by fire and sword, if necessary. In addition, Michael had hired mercenaries, both Turks and Tatars, to enforce his decree.

The emperor despised the monks of Mt. Athos for their opposition. Since he did not want to provoke the Greeks, he decided to vent his spite upon the Athonite Slavs. By Michael's order, the servants of the Pope descended upon the Bulgarian Zographou monastery. When the demand to accept the Union was presented before the Zographou monks, they refused to listen. They adhered to the doctrines of the Fathers, and fearlessly censured those who accepted the Latin teachings. The majority of the Zographou monks left the monastery, but the most steadfast, twenty-six in number, remained within the monastery tower. These were:Igumen Thomas, and the monks Barsanuphius, Cyril, Michael, Simon, Hilarion, James, Job, Cyprian, Sava, Jacob, Martinian, Cosmas, Sergius, Menas, Joasaph, Joannicius, Paul, Anthony, Euthymius, Dometian, Parthenius, and four laymen.

The holy martyrs for their Orthodox Faith, were burned in the monastery tower on October 10, 1284. (also September 22).