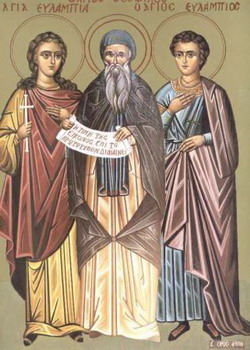 Saints Eulampius and Eulampia were brother and sister. They lived at the beginning of the fourth century in the city of Nicomedia. Eulampius became upset after reading the decree of the emperor Maximiam (284-305) sentencing all Christians to execution. Eulampius was horrified that the emperor was taking up arms against his own subjects rather than fighting the enemies of his country.

The youth was brought to trial and commanded to renounce the Christian Faith. When he refused, they first raked him with iron hooks, and then placed him upon a red-hot bed of coals. All of a sudden the sufferer expressed a wish to visit the pagan temple. The judges were delighted, supposing that they had turned him from Christianity. In the pagan temple of Mars the saint approached the idol and cried out, "In the Name of the Lord Jesus Christ I command you to fall to the floor and crumble into dust!" The idol immediately crashed down to the floor and was destroyed.

The people exclaimed, "The Supreme God is the Christian God, Who is great and mighty!" St Eulampius was again taken away for torture. This time his sister, Eulampia, appeared before the judges and declared that she also was a Christian. Eulampius told her, "Sister, do not fear those who kill the body but are unable to kill the soul" (Mt.10:28).

The martyrs were tortured and thrown into a red-hot furnace, but the Lord protected them from the fire. Finally, they beheaded Eulampius, but Eulampia died from her torments before she could be beheaded.

Your holy martyrs Eulampius and Eulampia, O Lord,
through their sufferings have received incorruptible crowns from You, our God.
For having Your strength, they laid low their adversaries,
and shattered the powerless boldness of demons.
Through their intercessions, save our souls!

Let us honor the noble martyrs,
brother and sister in the flesh, wise Eulampius and Eulampia;
for they put to shame the devices of tyrants
through the power of the Crucified one.
Therefore, they have been declared declared the glory and boast of martyrs. 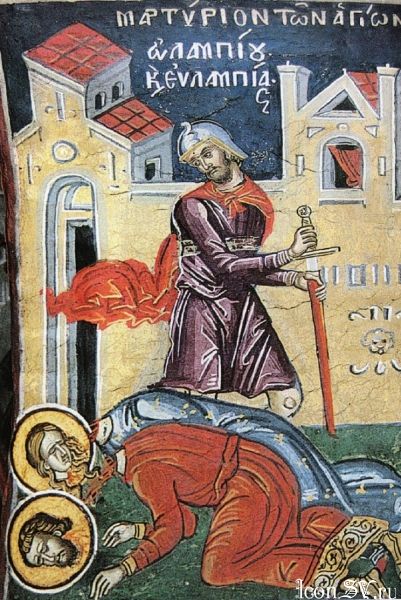