Our Holy Father Cyriacus the Solitary 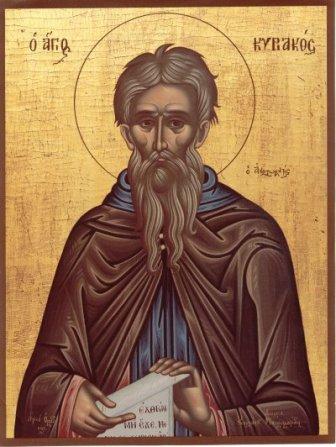 Saint Cyriacus was born at Corinth to the priest John and his wife Eudokia. Bishop Peter of Corinth, who was a relative, seeing that Cyriacus was growing up as a quiet and sensible child, made him a reader in church. Constant reading of the Holy Scriptures awakened in him a love for the Lord and of a yearning for a pure and saintly life.

Once, when the youth was not yet eighteen years old, he was deeply moved during a church service by the words of the Gospel: "If any man will come after Me, let him deny himself and take up his cross and follow Me" (Mt.16:24). He believed these words applied to him, so he went right to the harbor without stopping at home, got onto a ship and went to Jerusalem.

After visiting the holy places, Cyriacus dwelt for several months at a monastery not far from Sion in obedience to the igumen Abba Eustorgius. With his blessing, he made his way to the wilderness Lavra of St Euthymius the Great (January 20). St Euthymius, discerning in the youth great gifts of God, tonsured him into the monastic schema and placed him under the guidance of St Gerasimus (March 4), pursuing asceticism at the Jordan in the monastery of St Theoctistus.

St Gerasimus, seeing the youthfulness of Cyriacus, ordered him to live in the community with the brethren. The young monk easily accomplished the monastic obediences: he prayed fervently, he slept little, he ate food only every other day, nourishing himself with bread and water.

During Great Lent it was the custom of St Gerasimus to go into the Rouva wilderness, returning to the monastery only on Palm Sunday. Seeing Cyriacus' strict abstinence, he decided to take him with him. In complete solitude the ascetics redoubled their efforts. Each Sunday St Gerasimus imparted the Holy Mysteries to his disciple.

After the death of St Gerasimus, the twenty-seven-year-old Cyriacus returned to the Lavra of St Euthymius, but he was no longer among the living. St Cyriacus asked for a solitary cell and there he pursued asceticism in silence, communicating only with the monk Thomas. But soon Thomas was sent to Alexandria where he was consecrated bishop, and St Cyriacus spent ten years in total silence. At 37 years of age he was ordained to the diaconate.

Strict fasting and total lack of evil distinguished St Cyriacus even among the ascetics of the Lavra. In his cell each night he read the Psalter, interrupting the reading only to go to church at midnight. The ascetic slept very little. When the monk reached seventy years of age, he went to the Natoufa wilderness taking with him his disciple John.

In the desert the hermits fed themselves only with bitter herbs, which through the prayer of St Cyriacus was rendered edible. After five years one of the inhabitants found out about the ascetics and brought to them his demon-possessed son, and St Cyriacus healed him. From that time many people began to approach the monk with their needs, but he sought complete solitude and fled to the Rouva wilderness, where he dwelt five years more. But the sick and those afflicted by demons came to him in this wilderness, and the saint healed them all with the Sign of the Cross and by anointing them with oil.

At his 80th year of life St Cyriacus fled to the hidden Sousakim wilderness, where two dried up streams passed by. According to Tradition, the holy Prophet David brought Sousakim to attention: "Thou hast dried up the rivers of Etham" (Ps 73/74:15). After seven years, brethren of the Souka monastery came to him, beseeching his spiritual help during a period of debilitating hunger and illness, which God permitted. They implored St Cyriacus to return to the monastery, and he settled in a cave, in which St Chariton had once lived.

St Cyriacus rendered great help to the Church in the struggle with the spreading heresy of the Origenists. By prayer and by word, he brought the wayward back to the true path, and strengthened the Orthodox in their faith. Cyril, the author of the Life of St Cyriacus, and a monk of the Lavra of St Euthymius, was a witness when St Cyriacus predicted the impending death of the chief heretics Nonos and Leontius, and soon the heresy would cease to spread.

The Most Holy Theotokos Herself commanded St Cyriacus to keep to the Orthodox teaching in its purity: Having appeared to him in a dream together with the Sts John the Baptist and John the Theologian, She refused to enter into the cell of the monk because in it was a book with the words of the heretic Nestorius. "In your cell is My enemy," She said (The appearance of the Most Holy Theotokos to St Cyriacus is commemorated on June 8).

At the age of ninety-nine, St Cyriacus again went off to Susakim and lived there with his disciple John. In the wilderness a huge lion waited on St Cyriacus, protecting him from robbers, but it did not bother wandering brethren and it ate from the monk's hand.

Once in the heat of summer, all the water in the hollow of a rock dried up, where the ascetics had stored water during the winter, and there was no other source of water. St Cyriacus prayed, and rain fell, filling the pit with water.

For the two years before his death St Cyriacus returned to the monastery and again settled into the cave of St Chariton. Until the end of his life the righteous Elder preserved his courage, and prayed with fervor. He was never idle, either he prayed, or he worked. Before his death St Cyriacus summoned the brethren and blessed them all. He quietly fell asleep in the Lord, having lived 109 years.

O dweller of the desert and angel in the body
You appeared to us a wonder-worker.
O God-bearing father Kyriacus,
Through fasting, vigil and prayer you received Heavenly gifts,
Healing the sick and the souls of those drawn to you by faith.
Glory to Him who gave you strength!
Glory to Him who granted you a crown!
Glory to Him who through you grants healing to all!

You armed yourself divinely with purity of soul,
And firmly wielding the lance of incessant prayer,
You pierced through the devil's hosts.
Intercede without ceasing for us all, O Cyriacus, our father!