The Holy Martyrs Dada and Gobdelas 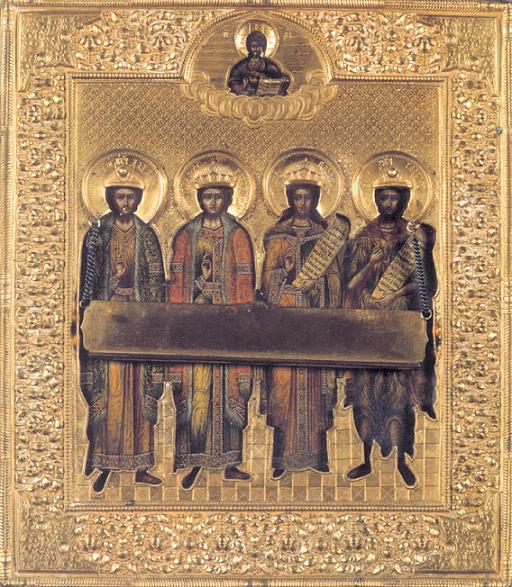 Not knowing that St Dadas was a Christian, the emperor appointed him as governor of one of the Persian districts. When it was discovered, he was stripped of all honors, sent to the court of the cruel torturer Andromelik and was condemned to be burned. Approaching the stake, St Dadas shielded himself with the Sign of the Cross, and the fire went out.

Seeing this miracle, the emperor's stunned son Gabeddas believed in Christ and in the hearing of all, confessed his faith. The judge reported this to the emperor, and he commanded St Gabeddas to be fiercely tortured. But in all the sufferings divine strength preserved the saint.

An angel of the Lord comforted him, and each time the Lord restored health and strength to him. Beholding the miraculous healing of the holy martyr, many prisoners in the prison with him became Christians, even the sorcerer Gargal, and thus accepted martyrdom. The emperor's daughter Kazdoa, sister of the Martyr Gabeddas, secretly visited him in prison and brought him water.

Another time Kazdoa saw her brother when the torturers tortured him anew. The holy martyr was hung on a cross, and a volley of arrows shot at him, but the arrows bounced off and struck the archers. Seeing his sister, he prevailed upon her to believe in Christ. St Kazdoa confessed herself a Christian, and by the command of her father the emperor Sapor, she was cruelly beaten and thrown into prison where her brother languished.

Suffering from her wounds, St Kazdoa asked her brother to pray for her. St Gabeddas, having said the prayer, assured his sister that she would suffer no more. On the following day during new tortures St Gabeddas, saw two presbyters Dadias and Abdi, asked them to bring oil and water, since he deeply wanted to receive holy Baptism.

At this moment a cloud overshadowed the martyr, from which poured out water and oil, and a voice was heard: "Servant of God, you have already received Baptism." The face of the martyr became radiant, and in the air was the fragrance of perfume. The torturer commanded the saint to be pierced with spears, and after several hours he died with prayer on his lips.

His body was cut into three parts, but the priests Dadias, Abdi and the deacon Armazates took the holy relics and buried them reverently. The body of the holy Martyr Dadas, whom they also tortured for a long time and cut in parts, was also secretly buried by Christians.

At midnight the Martyr Gabeddas appeared to the priest Dadias, gave him a vessel with oil and sent him to the martyr Kazdoa to anoint her with oil and give her the Holy Mysteries. The priest did this and, at the very last, said to the holy martyr: "Sleep, sister, until the coming of the Lord," and St Kazdoa departed to the Lord. The mother of the holy martyr prepared her for burial and with joy buried her with the Martyr Gabeddas.