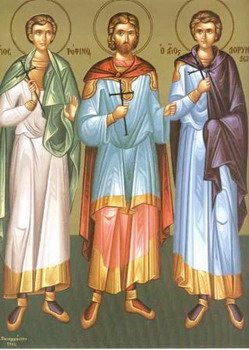 The Holy Martyrs Trophimus, Sabbatius and Dorymedon suffered for Christ during the reign of the Roman emperor Probus (276-282). A pagan festival was being celebrated in the city of Antioch. Sacrificial offerings were brought, the wine was poured, and vile acts were performed. The Christians Trophimus and Sabbatius arrived in the city just as the festival was taking place, and were saddened by this loud and indecent spectacle. They prayed that the Lord would guide the errant on the way of salvation. As they said this, the idolaters noticed their presence. Seeing that the strangers did not worship the idols, they arrested them and took them to the governor.

At their interrogation, the saints firmly confessed their faith. When they were told to renounce Christ, they resolutely refused to do so. St Sabbatius died under the fierce torment. St Trophimus was sent to the city of Synnada in Phrygia for even more terrible tortures.

For three days St Trophimus walked shod in iron sandals with sharp nails, driven on by a cavalry guard. The governor of Frigius, Dionysius, infamous as a torturer and executioner, used all manner of tortures to break the will of the brave Christian. St Trophimus merely repeated the words of Scripture: "many afflictions has the righteous one, but from them all will the Lord deliver him" (Ps 33/34:20).

The senator Dorymedon, a secret Christian, visited St Trophimus in prison, washing and binding his wounds. When the pagans learned that the senator would not participate in the festival of Castor and Pollux, they asked the reason for his refusal. He said that he was a Christian, and would not attend a festival in honor of the demons. He and St Trophimus were thrown to the wild beasts to be eaten by them, but the martyrs remained unharmed. Then they were beheaded with the sword.

God praised in Trinity has glorified a trinity of martyrs:
Trophimus, Sabbatius, and Dorymedon.
By their faith, they overthrew the adversary.
Through their prayers, O Christ our God, have mercy on us.

As the foundation of athletes and the confirmation of piety
the Church honors and glorifies your brilliant suffering,
wise and glorious Trophimus, ever-praised and blessed athlete.
Together with your fellow sufferers, ask cleansing for those who hymn you,
for you are invincible. 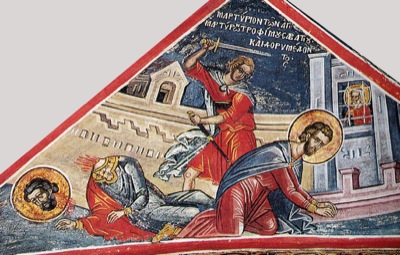