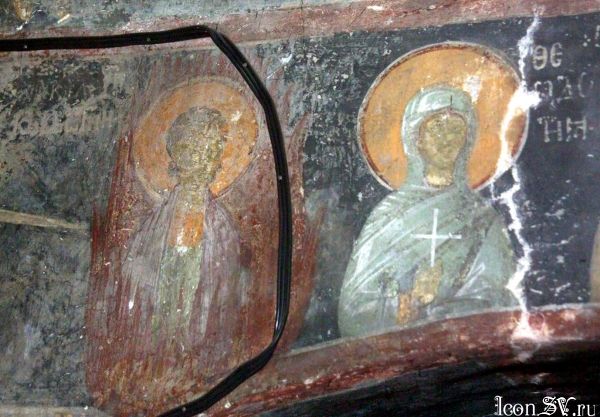 The Holy Martyr Theodota, a native of Cappadocia, suffered in the city of Nicea during the reign of the emperor Alexander Severus (222-235). At this time the governor of Cappadocia was a certain Symblicius. They told him that a rich woman named Theodota was confessing Christ. The governor summoned Theodota and for a long time urged her to turn from the true Faith.

Seeing the futility of his attempts, he gave Theodota over to torture. They suspended her and began to rake her with iron hooks, but she did not feel any pain. Then they put her in chains and led her away to a prison cell.

After eight days, when they led the saint out for new tortures, only faint traces of the tortures already endured remained on her body. The governor was amazed and asked, "Who are you?" The saint answered: "Your mind is darkened, but if you were sober, then you would have realized that I am Theodota."

Symblicius commanded the martyr to be cast into a red-hot furnace. Flames shot out from the furnace and scorched those standing nearby, while those remaining unharmed shut the furnace and scattered in fright. After a certain while, pagan priests came and opened the furnace to scatter the ashes of the martyr, but they too were burned by the flames. Those remaining unhurt saw St Theodota unharmed. She stood in the midst of the flames between two youths in white raiment, and was glorifying the Lord. This apparition so terrified the pagans that they fell down as if dead. Later, they returned the saint to prison.

The invincibility of the martyr gave Symblicius no peace. He made a journey to Byzantium, on the return trip he stopped over at Ancyra and tried to get the better of Theodota. He gave orders to throw her all at once onto red-hot iron, but again the martyr remained unharmed.

Then Symblicius gave orders that the saint be taken to Nicea. There, in a pagan temple he wanted to compel her to offer sacrifice to the idols, but through the prayer of the saint, the idols fell and were shattered. The outraged governor gave orders to stretch the martyr out and saw through her body, but here also the power of God preserved the saint. The saw caused Theodota no harm, and the servants became exhausted. Finally, they beheaded the saint. Bishop Sophronius of Nicea buried her body.