The Holy Martyrs Sergius and Bacchus 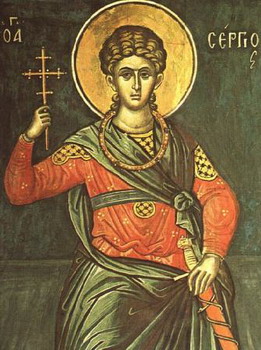 The Martyrs Sergius and Bacchus in Syria were appointed to high positions in the army by the emperor Maximian (284-305), who did not know that they were Christians. Envious people informed Maximian that his two trusted counsellors did not honor the pagan gods. This was considered to be a crime against the state.

The emperor, wanting to convince himself of the truth of the accusation, ordered Sergius and Bacchus to offer sacrifice to the idols, but they replied that they honored the One God and worshiped only Him.

Maximian commanded that the martyrs be stripped of the insignia of military rank (their belts, gold pendants, and rings), and then dressed them in feminine clothing. They were led through the city with an iron chains around their necks, and the people mocked them. Then he summoned Sergius and Bacchus to him again and in a friendly manner advised them not to be swayed by Christian fables, but to return to the Roman gods. The saints refuted the emperor's words, and demonstrated the folly of worshiping the pagan gods.

The emperor commanded that they be sent to the governor of the eastern part of Syria, Antiochus, a fierce hater of Christians. Antiochus had received his position with the help of Sergius and Bacchus. "My fathers and benefactors!" he said. "Have pity on yourselves, and also on me. I do not want to condemn my benefactors to cruel tortures." The holy martyrs replied, "For us life is Christ, and to die is gain." The enraged Antiochus ordered Bacchus to be mercilessly beaten, and the holy martyr surrendered his soul to the Lord. They shod Sergius with iron sandals with nails in their soles and sent him to another city, where he was beheaded with the sword.

Your holy martyrs Sergius and Bacchus, O Lord,
through their sufferings have received incorruptible crowns from You, our God.
For having Your strength, they laid low their adversaries,
and shattered the powerless boldness of demons.
Through their intercessions, save our souls!

Podoben: "Seeking the highest..."
Having courageously confronted the enemy,
you brought an end to his guiles, and received from on high the crown of victory.
Illustrious martyrs, Sergius and Bacchus,
with one heart you cry aloud:
"How good and pleasant it is to dwell with God." 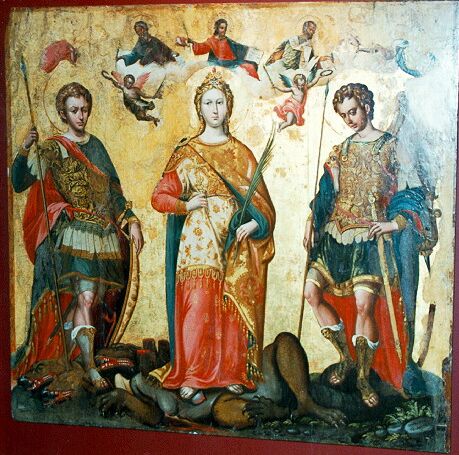