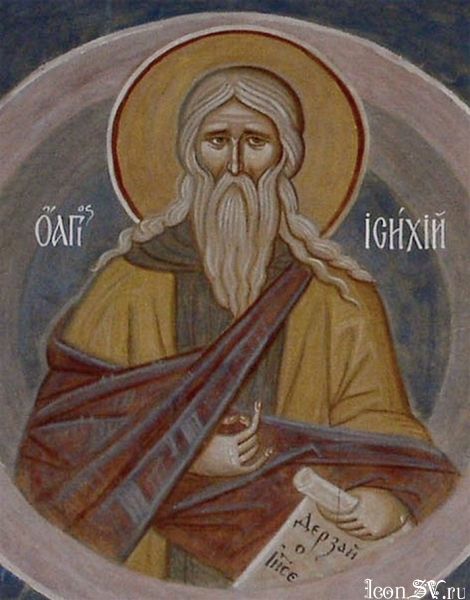 Saint Hesychius the Silent of Mt. Horeb, lived during the sixth century at one of the monasteries on Mt. Horeb, and at first he was not a very fervent monk. Hesychius died after a serious illness, but through a wondrous act of Divine Providence, he came back to life an hour later. After this, the saint secluded himself in his cell as a recluse, and for twelve years he dwelt in complete solitude. He would not converse with any of the brethren, but devoted himself to the singing of Psalms and penitential weeping. Before his death, Blessed Hesychius said to the assembled monks: "Forgive me, brethren. He who acquires the remembrance of death cannot sin."

The holy hesychasts (those who keep silence) are the spiritual descendants of St Hesychius. These ascetics devote themselves to contemplating God, and to unceasing prayer of the heart.