Our Holy Father Romanus the Melodist 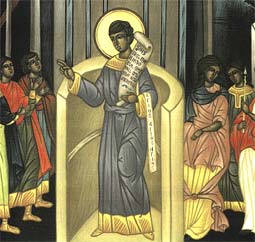 Saint Romanus the Melodist was born in the fifth century in the Syrian city of Emesa of Jewish parents. After moving to Constantinople, he became a church sacristan in the temple of Hagia Sophia. The monk spent his nights alone at prayer in a field or in the Blachernae church beyond the city.

St Romanus was not a talented reader or singer. Once, on the eve of the Nativity of Christ, he read the kathisma verses. He read so poorly that another reader had to take his place. The clergy ridiculed Romanus, which devastated him.

On the day of the Nativity, the Mother of God appeared to the grief-stricken youth in a vision while he was praying before her Kyriotissa icon. She gave him a scroll and commanded him to eat it. Thus was he given the gift of understanding, composition, and hymnography.

That evening at the all-night Vigil St Romanus sang, in a wondrous voice, his first Kontakion: "Today the Virgin gives birth to the Transcendent One..." All the hymns of St Romanus became known as kontakia, in reference to the Virgin's scroll. St Romanus was also the first to write in the form of the Oikos, which he incorporated into the all-night Vigil at his places of residence (In Greek, "oikos").

For his zealous service St Romanus was ordained as a deacon and became a teacher of song. Until his death, which occurred about the year 556, the hierodeacon Romanus the Melodist composed nearly a thousand hymns, many of which are still used by Christians to glorify the Lord. About eighty survive.

You gladdened Christ's Church by your melodies
like an inspired heavenly trumpet.
You were enlightened by the Mother of God
and shone on the world as God's poet.
We lovingly honor you, righteous Romanus.

You were adorned from childhood with the godly virtues of the Spirit;
you were a precious adornment of the Church of Christ, all-wise Romanus,
for you made it lovely with beautiful hymnody.
Therefore, we entreat you, grant your divine gift to those who desire it,
that we may cry out to you: "Rejoice, all-blessed Father, beauty of the Church." 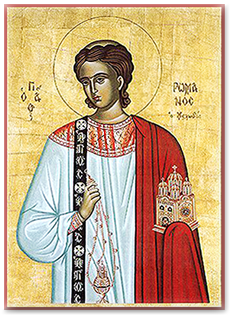 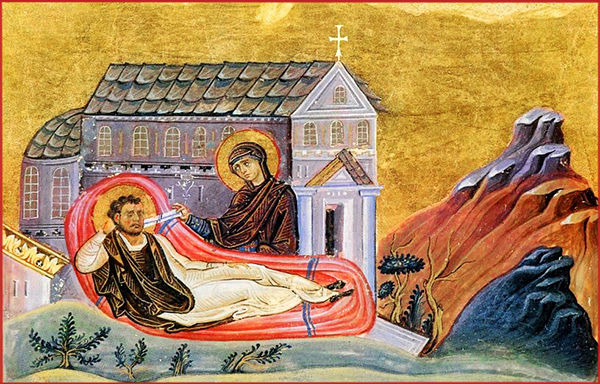