Our Holy Father John the Chozebite, the Egyptian 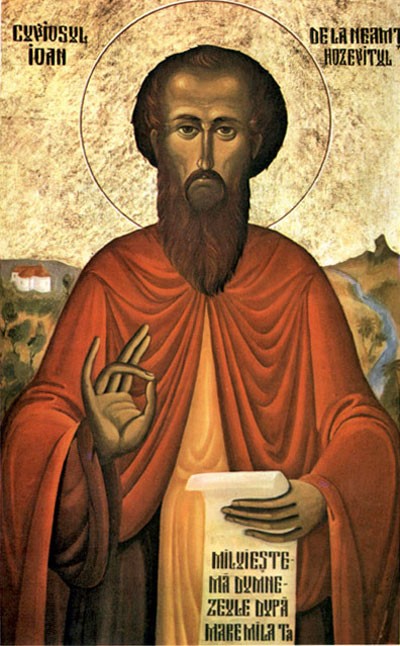 Saint John the Chozebite, Bishop of Caesarea in Palestine (587-596), was famed for his struggle against the Eutychian heresy, and also for his grace-filled gifts of discernment and wonderworking. He was born in the Egyptian city of Thebes and while still a youth he spent a long time in the Thebaid desert with his uncle, who was an ascetic,.

The emperor, who learned of John's holy life, decided to make him bishop of the city of Caesarea. But the saint, yearning for solitude, left his cathedra and withdrew into the Chozeba wilderness (between Jerusalem and Jericho) where he struggled in asceticism until the end of his life.

Once, while on his way to visit some of the brethren, he met a woman on the road. She entreated him to follow her to her home so that he might bless it and sanctify it by his prayers. Once they entered the house, however, the vile woman locked the door and removed all her clothing, and tried to tempt the saint into sinning with her. He opened the door and fled from the place.

. After this, he performed many miracles until he fell asleep in the Lord. It is said that whenever he served the Divine Liturgy, he would see a heavenly light in the altar.