The Hieromartyr Dionysius the Areopagite

The Hieromartyr Dionysius the Areopagite, Bishop of Athens St Dionysius lived originally in the city of Athens. He was raised there and received a classical Greek education. He then went to Egypt, where he studied astronomy at the city of Heliopolis. It was in Heliopolis, along with his friend Apollophonos where he witnessed the solar eclipse that occurred at the moment of the death of the Lord Jesus Christ by Crucifixion. "Either the Creator of all the world now suffers, or this visible world is coming to an end," Dionysius said. Upon his return to Athens from Egypt, he was chosen to be a member of the Areopagus Council (Athenian high court).

During the lifetime of the Mother of God, St Dionysius had journeyed from Athens to Jerusalem to meet Her. He wrote to his teacher the Apostle Paul: "I witness by God, that besides the very God Himself, there is nothing else filled with such divine power and grace. No one can fully comprehend what I saw. I confess before God: when I was with John, who shone among the Apostles like the sun in the sky, when I was brought before the countenance of the Most Holy Virgin, I experienced an inexpressible sensation. Before me gleamed a sort of divine radiance which transfixed my spirit. I perceived the fragrance of indescribable aromas and was filled with such delight that my very body became faint, and my spirit could hardly endure these signs and marks of eternal majesty and heavenly power. The grace from her overwhelmed my heart and shook my very spirit. If I did not have in mind your instruction, I should have mistaken Her for the very God. It is impossible to stand before greater blessedness than this which I beheld."

After the death of the Apostle Paul, St Dionysius wanted to continue with his work, and therefore went off preaching in the West, accompanied by the Presbyter Rusticus and Deacon Eleutherius. They converted many to Christ at Rome, and then in Germany, and then in Spain. In Gaul, during a persecution against Christians by the pagan authorities, all three confessors were arrested and thrown into prison. By night St Dionysius celebrated the Divine Liturgy with angels of the Lord. In the morning the martyrs were beheaded. According to an old tradition, St Dionysius took up his head, proceeded with it to the church and fell down dead there. A pious woman named Catulla buried the relics of the saint.

The writings of St Dionysius the Areopagite hold great significance for the Orthodox Church. Four books of his have survived to the present day:

The book On the Celestial Hierarchies was written actually in one of the countries of Western Europe, where St Dionysius was preaching. In it he speaks of the Christian teaching about the angelic world. The angelic (or Celestial-Heavenly) hierarchy comprises the nine angelic Ranks:

The account of the Synaxis of the Bodiless Powers of Heaven is located under November 8.

The purpose of the divinely-established Angelic Hierarchy is the ascent towards godliness through purification, enlightenment and perfection. The highest ranks are bearers of divine light and divine life for the lower ranks. And not only are the sentient, bodiless angelic hosts included in the spiritual light-bearing hierarchy, but also the human race, created anew and sanctified in the Church of Christ.

The book of St Dionysius On the Ecclesiastical Hierarchies is a continuation of his book On the Celestial Hierarchies. The Church of Christ, like the Angelic ranks, in its universal service is set upon the foundation of priestly principles established by God.

In the earthly world, for the children of the Church, divine grace comes down indescribably in the holy Mysteries of the Church, which are spiritual in nature, though perceptible to the senses in form. Few, even among the holy ascetics, were able to behold with their earthly eyes the fiery vision of the Holy Mysteries of God. But outside of the Church's sacraments, outside of Baptism and the Eucharist, the light-bearing saving grace of God is not found, neither is divine knowledge nor theosis (deification).

The book On the Names of God expounds upon the way of divine knowledge through a progression of the Divine Names.

St Dionysius' book On Mystical Theology also sets forth the teaching about divine knowledge. The theology of the Orthodox Church is totally based upon experience of divine knowledge. In order to know God it is necessary to be in proximity to Him, to have come near to Him in some measure, so as to attain dommunion with God and deification (theosis). This condition is accomplished through prayer. This is not because prayer in itself brings us close to the incomprehensible God, but rather that the purity of heart in true prayer brings us closer to God.

The written works of St Dionysius the Areopagite are of extraordinary significance in the theology of the Orthodox Church, and also for late Medieval Western theology. For almost four centuries, until the beginning of the sixth century, the works of this holy Father of the Church were preserved in an obscure manuscript tradition, primarily by theologians of the Alexandrian Church. The concepts in these works were known and utilized by Clement of Alexandria, Origen, Dionysius the Great, pre-eminent figures of the catechetical school in Alexandria, and also by St Gregory the Theologian. St Dionysius of Alexandria wrote to St Gregory the Theologian a Commentary on the "Areopagitum." The works of St Dionysius the Areopagite received general Church recognition during the sixth-seventh centuries.

Particularly relevant are the Commentaries written by St Maximus the Confessor (January 21). (trans. note: although many scholars suggest that the "Areopagitum" was actually written by an anonymous sixth century figure who employed the common ancient device of piously borrowing an illustrious name, this in no way diminishes the profound theological significance of the works.)

In the Russian Orthodox Church the teachings of St Dionysius the Areopagite about the spiritual principles and deification were at first known through the writings of St John of Damascus (December 4). The first Slavonic translation of the "Areopagitum" was done on Mt. Athos in about the year 1371 by a monk named Isaiah. Copies of it were widely distributed in Russia. Many of them have been preserved to the present day in historic manuscript collections, among which is a parchment manuscript "Works of St Dionysius the Areopagite" belonging to St Cyprian, Metropolitan of Kiev and All Rus (September 16) in his own handwriting.

According to one tradition, he was killed at Lutetia (ancient name of Paris, France) in the year 96 during the persecution under the Roman emperor Dometian (81-96). Today most scholars and theologians believe that St Dionysius the Areopagite did not die in Gaul, and that St Dionysius (or Denys) of Paris is a different saint with the same name.

St Demetrius of Rostov says that the Hieromartyr Dionysius was beheaded in Athens, and that many miracles were worked at his grave.

Having learned goodness and maintaining continence in all things,
you were arrayed with a good conscience as befits a priest.
From the chosen Vessel you drew ineffable mysteries;
you kept the faith, and finished a course equal to His.
Bishop martyr Dionysius, entreat Christ God that our souls may be saved.

As a disciple of the apostle caught up to the third heaven,
you spiritually entered the gate of heaven, Dionysius.
You were enriched with understanding of ineffable mysteries
and enlightened those who sat in the darkness of ignorance.
Therefore we cry to you: Rejoice, universal Father! 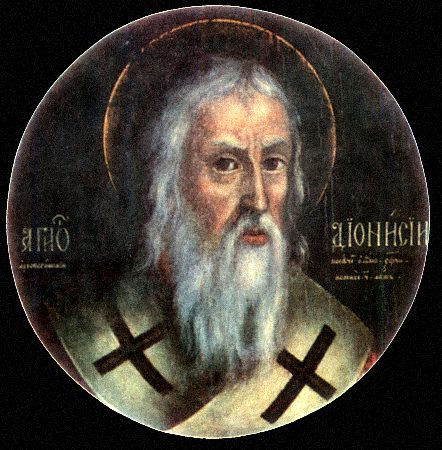