The Holy Martyrs David and Constantine 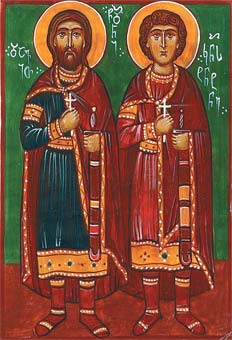 The 8th century was extremely difficult for the Georgian people. Marwan bin Muhammad (called “the Deaf” by the Georgians and “the Blind” by the Armenians), the Persian ruler and military leader for the Arab caliph, invaded eastern parts of the Byzantine Empire, then Armenia and Georgia.

With fire and the sword he fought his way across Georgia from the east to the city of Tskhumi (now Sokhumi) in the region of Abkhazeti. The princes David and Constantine Mkheidze of Argveti were faithful Christians and skilled military leaders. When they heard about the enemy’s invasion, the brothers prayed to God for protection, assembled their armies, and urged their people to pray fervently for God’s help.

The Persian warriors approached Argveti from Samtskhe and attacked the Georgians on Persati Mountain. The Georgian army won the battle, with David and Constantine leading the resistance against the fearsome conquerors.

But before long the enraged Marwan the Deaf gathered an enormous army and marched toward Argveti to take revenge. This time the enemy routed the Georgian army. Many were killed and those who survived were forced to flee to the forests. The commanders David and Constantine were taken captive.

The Persian soldiers bound David and Constantine and brought them before Marwan the Deaf, who began to mock them. But they reacted with complete composure, saying, “Your laughter and boasting are in vain, since earthly glory is fleeting and soon fades away. It is not your valor that has captured us, but our own sins. For the atonement of these sins have we fallen into the hands of the godless enemy!”

The furious Marwan ordered that the brothers be beaten without mercy, but they steadfastly endured the suffering. Stunned by the brothers’ resolve, Marwan decided to win them over with flattery instead. Promising him great honors and command of the armies, he turned to the older brother, David, saying, “I have heard of your valor, and I advise you to abandon your erroneous faith and submit yourself to the faith of Muhammad!”

St. David crossed himself and answered, “Let not this disgrace come upon us, that we would depart from the light and draw nearer to the darkness!” Then he condemned the error of the Islamic faith: “Muhammad converted you from the worship of fire, but he could not instill in you the knowledge of the True God. Therefore it appears as though you suffered a shipwreck and saved yourselves from the depths of the sea, but drowned in the shallow waters of the coast.”

Enraged at this reply, Marwan turned to the younger brother, Constantine, hoping to win him over to his side. But Constantine was also unbending, and he fearlessly glorified the Most Holy Trinity: “My brother David and I believe and follow the one Faith and one doctrine in which we have been instructed. Our faith is in the Father and the Son and the Holy Spirit, and we will die for the sake of the One True God!”

Marwan ordered that the brothers be starved to death. After they had suffered for ten days, Marwan sent sorcerers and charmers to arouse in them a desire to convert to Islam, but their efforts were in vain. Finally the holy brothers David and Constantine were led to the riverbank near the Church of Sts. Cosmas and Damian. There they were brutally beaten and bound. Heavy rocks were hung from their necks, and they were drowned in the river.

That night three beams of light descended from the heavens and lit up the place where the brothers had been drowned. According to God’s holy will, the ropes binding the holy martyrs were loosed, and their bodies floated to the surface. A group of faithful Christians carried them out of the river and buried them on the bank of the Tsqaltsitela River, in a church that Marwan the Deaf had devastated.

The place of their burial remained concealed until the beginning of the 12th century, during the reign of King Bagrat the Great (1072–1117). Then, in fulfillment of King Bagrat’s decree, the Monastery of the Martyrs (Motsameta) was built over that place, and the incorrupt relics of the Great Martyrs are still preserved there. 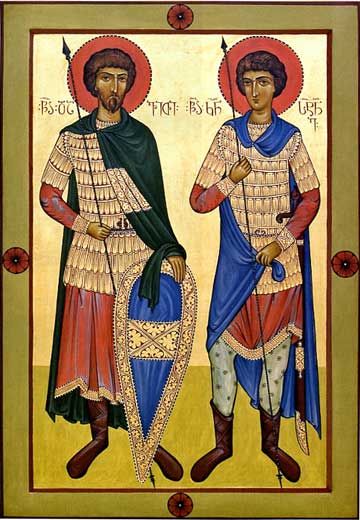