The Hieromartyr Hypatius, Bishop of Ephesus, and Andrew the Priest 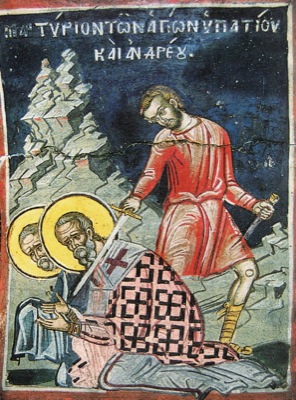 Hieromartyr Hypatius, Bishop of Ephesus, and the Priest Andrew suffered in the eighth century under the iconoclast emperor Leo the Isaurian (717-741). As young men, they studied together in one of the monasteries. St Hypatius accepted monasticism, and St Andrew became a clergyman and zealously instructed people in the Christian Faith.

When the emperor Leo the Isaurian began to persecute those who venerated holy icons, and the holy icons were thrown out of the churches, to be trampled underfoot and burned, Sts Hypatius and Andrew rose up in defence of icon veneration, urging their flock to maintain faithfulness to Orthodoxy.

They threw the martyrs into prison and for a long time they held them there, hoping that this would force the saints to renounce their convictions, but the saints remained steadfast. Then the emperor gave orders to torture the martyrs. They beat them, flayed the skin and hair from their heads, smeared their beards with tar and set it afire, and they burned holy icons upon the heads of the martyrs.

The saints bore all their tortures patiently and remained alive. The emperor gave orders to drag the saints through the city to be mocked by the people, and only after this to kill them. They threw the bodies of Sts Hypatius and Andrew to be eaten by dogs, but believers reverently gave them burial.