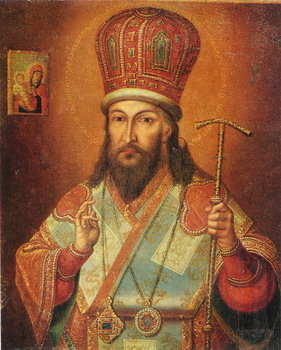 In 1702, Saint Demetrius, Metropolitan of Rostov, arrived at the Rostov cathedral and also visited the monastery of St James, Bishop of Rostov (November 27 and May 23).

He served Liturgy at the cathedral church of the Conception of the Most Holy Theotokos, after which he indicated to those present the site of his future burial on the right side of the temple. "Behold my resting place," he said, "here I will settle for eternity." St Demetrius reposed on October 28, 1709.

Contrary to the saint's wishes, which he expressed in his will, the clergy and people of Rostov asked the locum tenens of the patriarchal throne, Metropolitan Stephen Yavorsky of Ryazan, who had come for the funeral, to conduct the burial at the cathedral church of the city.

Metropolitan Stephen insisted on burying the body of his deceased friend beside St Joasaph, who was St Demetrius's predecessor. However, a grave was not prepared until the arrival of Metropolitan Stephen, even lthough about a month had elapsed since the saint's death.

Due to the urgent departure of Metropolitan Stephen from Rostov, a hastily constructed wooden frame was placed into the grave, in which the body of the saint was buried on November 25. This circumstance, foreseen by the Providence of God, led to a quick uncovering of the relics.

In 1752 repairs were being done at the cathedral church of the monastery, and on September 21, the incorrupt body of St Demetrius was discovered. The place of burial had been affected by dampness, the oaken coffin and the writing on it were decayed, but the body of the saint, and even the omophorion, sacchos, mitre and silken prayer rope were preserved undamaged.

After the uncovering of the holy relics many healings were worked, which were reported to the Synod, by whose order Metropolitan Sylvester of Suzdal and Archimandrite Gabriel of Simonov arrived at Rostov to examine the relics of St Demetrius, and to investigate the incidents of miraculous healings.

A decree was issued by the Synod on April 29, 1757 numbering St Demetrius, Metropolitan of Rostov among the saints, and establishing his feastdays for October 28 (the day of his repose) and September 21 (the uncovering of his relics). 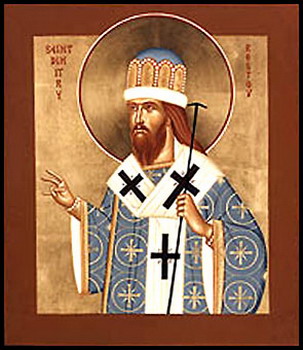 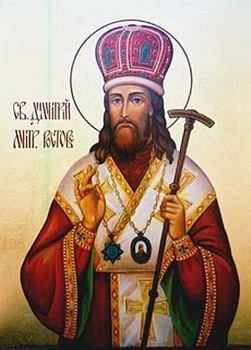